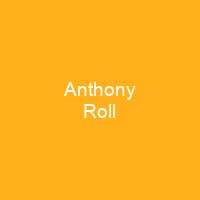 The Anthony Roll is a paper record of ships of the English Tudor navy of the 1540s. It originally consisted of three rolls of vellum, depicting 58 naval vessels along with information on their size, crew, armament, and basic equipment. The rolls were presented to King Henry VIII in 1546, and were kept in the royal library. Anthony Anthony has been identified as the compiler of the information.

About Anthony Roll in brief

The Anthony Roll is a paper record of ships of the English Tudor navy of the 1540s. It originally consisted of three rolls of vellum, depicting 58 naval vessels along with information on their size, crew, armament, and basic equipment. The rolls were presented to King Henry VIII in 1546, and were kept in the royal library. In 1680 King Charles II gave two of the rolls to Samuel Pepys, who had them cut up and bound as a single volume book. The third roll remained in the Royal collection until it was given by King William IV to his daughter Lady Mary Fox, who sold it to the British Museum in 1858; it is now owned by the British Library. Anthony Anthony has been identified as the compiler of the information and the artist behind the illustrations through his signature, which has been compared with holograph letters among the State Papers. The only known contemporary depictions of prominent Tudor era vessels like the Henry Grace à Dieu and the Mary Rose are contained in the Anthony Roll. The Mary Rose sank by accident in 1545 and was successfully salvaged in 1982, comparison between the information in the Roll and the physical evidence of theMary Rose has provided new insights into the study of the naval history of the period. In 1939 Dutch historian Nicholas Beets proposed that the Flemish artist and cartographer Cornelis Antoniszoon could have been Anthony Anthony’s brother. Although Beets’ suggestion of kinship was conjectural and without any direct evidence, it was picked up by Geoffrey Callender in the Mariner’s Mirror in 1963 and has been relayed by several other authors.

There is little evidence that they were connected at all. The Anthony Roll belongs to a genre of works that was intended to serve a dual role for the king and the military leadership: listing details of ships or strategic areas of the coast. Such maps were common at the time, and embellished by artists if too simple or drab. The navy was expanded during Henry VIII’s reign, and the pictures of ships were routinely decorated with detailed pictures of bodies of water, much as much as to liven up the scenes of water. The works of art were used to flatter the king, impress the courtiers and impose martial authority on foreign ambassadors, and even if they might be too simple, they could be used to boast of the military might of the Tudor period. The paintings of ships, or ‘plats’ or’plats’, were routinely used to mark out strategic areas, or even drab areas of water that were to be explored by foreign ambassadors or military might. In 1549 Anthony Anthony was promoted to master surveyor of the Ordnance Office, the government body responsible for supplying the armed forces with artillery, and it was in this position that he compiled his Roll. He continued the work of supplying arms to English forces, and was active in the last month of his life supplying guns for an expedition against Le Havre. He went into beer exporting no later than 1530 and became a supplier of beer to the navy.

You want to know more about Anthony Roll?

This page is based on the article Anthony Roll published in Wikipedia (as of Oct. 31, 2020) and was automatically summarized using artificial intelligence.