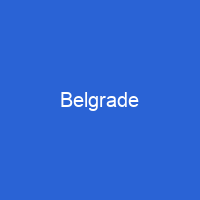 Belgrade is the capital and largest city of Serbia. Nearly 1.7 million people live within the administrative limits of the City of Belgrade. It is one of the oldest continuously inhabited cities in Europe and the World. The city is home to the Clinical Centre of Serbia, the largest hospital complexes with the largest capacity in the world.

About Belgrade in brief

Belgrade is the capital and largest city of Serbia. Nearly 1.7 million people live within the administrative limits of the City of Belgrade. Belgrade is one of the oldest continuously inhabited cities in Europe and the World. One of the most important prehistoric cultures of Europe, the Vinča culture, evolved within the Belgrade area in the 6th millennium BC. In a fatally strategic position, the city has been battled over in 115 wars and razed 44 times, being bombed five times and besieged many times. It is the seat of the central government, administrative bodies, and government ministries, as well as home of almost all of the largest Serbian companies, media, and scientific institutions. It hosted major international events such as the Danube River Conference of 1948, the first major gathering of the OSCE, Eurovision Song Contest and EuroBasket three-times. The city is home to the Clinical Centre of Serbia, the largest hospital complexes with the largest capacity in the world, the Church of Saint Sava, and the Štark Arena, the biggest indoor arena in Europe. It was the capital of Yugoslavia from its creation in 1918 to its dissolution in 2006, and was attached to the city in 1918, due to former Austro-Hungarian territories becoming the part of the new Kingdom of Serbs, Croats and Slovenes after World War I. It has been the host of the FINA World Aquatics Championships, UEFA Euro, Summer Universiade and Eurobasket three years in a row.

The first farming people to settle in the region are associated with the Neolithic Starčevo culture, which flourished between 6200 and 5200 BC. Chipped stone tools found in Zemun show that the area around Belgrade was inhabited by nomadic foragers in the Palaeolithic and Mesolithic eras. Some of these tools are of Mousterian industry—belonging to Neanderthals rather than modern humans. Within the proper city proper, on Cetinjska Street, a skull of a Paleolithic human was discovered in 1890. Evidence of early knowledge of early European script, which dates back to 5000 BC, which is known as Old European Script, which developed prior to the Sumerians and Minoans known as the Old European script. The Vinča culture is known for its very large settlements and sophisticated farming culture. The Vinče culture is also known for the large settlements, which grew out of the earlier Starçevo settlements and also named a region for the site in Belgrade, called the Belgrade region. It also includes the eponymous site of Starçe, which was named for the Lady Vinčo, a figurine of the Vinçe culture. In antiquity, Thraco-Dacians inhabited the region and, after 279 BC, Celts settled the city, naming it Singidūn. In the mid-2nd century, it was conquered by the Romans under the reign of Augustus and awarded Roman city rights in the 2nd century.

You want to know more about Belgrade?

This page is based on the article Belgrade published in Wikipedia (as of Dec. 03, 2020) and was automatically summarized using artificial intelligence.