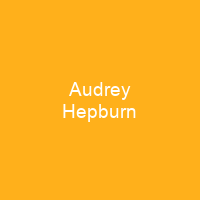 Audrey Hepburn was a British actress and humanitarian. She was the first actress to win an Oscar, a Golden Globe Award, and a BAFTA Award for a single performance. She died of appendiceal cancer at her home in Switzerland at the age of 63.

About Audrey Hepburn in brief

Audrey Hepburn was a British actress and humanitarian. Born in Ixelles, Brussels, Hepburn spent parts of her childhood in Belgium, England, and the Netherlands. She studied ballet with Sonia Gaskell in Amsterdam beginning in 1945 and with Marie Rambert in London starting in 1948. Hepburn starred in the 1951 Broadway play Gigi after being spotted by the French novelist Colette, on whose work the play was based. She rose to stardom in the romantic comedy Roman Holiday alongside Gregory Peck, for which she was the first actress to win an Oscar, a Golden Globe Award, and a BAFTA Award for a single performance. Later in life, she devoted much of her time to UNICEF, to which she had contributed since 1954. In December 1992, she received the Presidential Medal of Freedom in recognition of her work as aUNICEF Goodwill Ambassador. A month later, she died of appendiceal cancer at her home in Switzerland at the age of 63. She remains one of only 16 people who have won Academy, Emmy, Grammy, and Tony Awards. She was ranked by the American Film Institute as the third-greatest female screen legend in Golden Age Hollywood, and was inducted into the International Best Dressed List Hall of Fame. She won three BAFTA Awards for Best British Actress in a Leading Role. Her last recorded performances were in the 1990 documentary television series Gardens of the World with Audrey Hepburn.

Her father was Joseph Victor Anthony Ruston, a British subject born in Auschitz, Bohemia, Austria-Hungary. Her mother, Baroness Ella van Heemstra, was a Dutch noblewoman, who served as Mayor of Arnhem from 1910 to 1920 and as Governor of Dutch Suriname from 1921 to 1928. She had two sons, Jonkheer Arnoud Robert Alexander Quarles van Ufford and Jonk heer Ian Edgar Bruce Quarle vanUfford. Her parents were married in Batavia, Dutch East Indies, in September 1926. At the time, Ruston worked for a trading company, but soon after the couple moved to Europe, where he began working for a loan company; he reportedly worked for MacLaine Watson and Maclaine’s tin merchants. After the marriage, he reportedly moved to London and then to Brussels. He later married Ella at her insistence, as he mistakenly believed himself descended from James Hepburn, third husband of Mary, Queen of Scots. In 1923–1924, Joseph had been an Honorary British Consul in Semarang in the DutchEast Indies, and prior to his marriage to Hepburn’s mother, he had been married to Cornop, a Dutch heiress to the Corniress. He was the son of Victor John George Ruston and Anna Wels, who was of Austrian origin and born in Kovarce. He had three children with Ella, who had been born in 1915.

You want to know more about Audrey Hepburn?

This page is based on the article Audrey Hepburn published in Wikipedia (as of Dec. 14, 2020) and was automatically summarized using artificial intelligence.