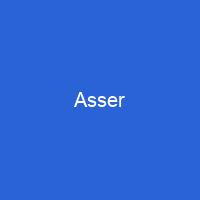 Asser was a Welsh monk from St David’s, Dyfed, who became Bishop of Sherborne in the 890s. In 893, Asser wrote a biography of Alfred, called the Life of King Alfred. Asser is sometimes cited as a source for the legend about Alfred’s having founded the University of Oxford.

About Asser in brief

Asser was a Welsh monk from St David’s, Dyfed, who became Bishop of Sherborne in the 890s. In 893, Asser wrote a biography of Alfred, called the Life of King Alfred. Asser is sometimes cited as a source for the legend about Alfred’s having founded the University of Oxford, which is now known to be false. It is not known how Alfred heard of Asser, but one possibility relates to Alfred’s overlordship of south Wales. Several kings, including Hywel ap Rhys of Glywysing and Hyfaidd of Dyfed, had submitted to Alfred’s overlordships in 885. There is a charter of Hywal’s which has been dated to c. 885; amongst the witnesses is one ‘Asser’ which may be the same person. It appears most likely that Asser was recruited by Alfred in early 885, as he was brought up in the area and was tonsured, trained and ordained there. He also mentions Nobis, a bishop of St David”s who died in 873 or 874, as being a kinsman of his. The name Asser is likely to have been taken from Aser, or Asher, the eighth son of Jacob in Genesis. It has been suggested that this name may have been adopted at the time Asser entered the church. The manuscript survived to modern times in only one copy, which was part of the Cotton library. That copy was destroyed in a fire in 1731, but transcriptions that had been made earlier, together with material from Asser’s work which was included by other early writers, have enabled the work to be reconstructed.

Asser provides only one datable event in his history: on St Martin’s Day, 11 November 887, Alfred decided to learn to read Latin. Working backwards from this, it appears mostlikely that Assers life is most likely from at least AD 885 until about 909. The biography is the main source of information about Alfred and provides far more information about him than is known about any other early English ruler. The Life of Alfred is now almost universally accepted as genuine, but doubts have been raised periodically about whether the entire Life is a forgery, written by a slightly later writer, but it is now now almost universal accepted as authentic. A short section in which Asser recounts how Alfred recruited him as a scholar for his court is included in his biography of the late king. In this section Asser tells how Alfred told him that he would keep his promise, since they hoped to avoid afflictions and injuries at the hands of Alfred’s court. Others supported this promise, including John Grimbald, who noted Alfred’s promise, and Asser joined several other scholars at the court, including Alfred’s son John Grimald. In the end, Alfred wrote a letter to Asser in which he promised to find out the cause of the delay.

You want to know more about Asser?

This page is based on the article Asser published in Wikipedia (as of Nov. 23, 2020) and was automatically summarized using artificial intelligence.

Æthelred, Lord of the Mercians

Æthelred, Lord of the Mercians