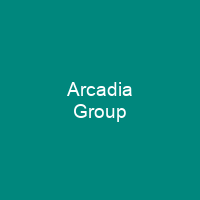 Arcadia Group Ltd. owns Burton, Dorothy Perkins, Evans, Miss Selfridge, Topman, Topshop, Wallis and Outfit. At its peak, the group had more than 2,500 outlets in the UK, concessions in UK department stores such as Debenhams and Selfridges, and several hundred franchises in other countries.

About Arcadia Group in brief

Arcadia Group Ltd. is a British multinational retailing company headquartered in London, England. It owns the high street clothing retailers Burton, Dorothy Perkins, Evans, Miss Selfridge, Topman, Topshop, Wallis and Outfit. At its peak, the group had more than 2,500 outlets in the UK, concessions in UK department stores such as Debenhams and Selfridges, and several hundred franchises in other countries. The company was majority owned by Taveta Investments, owned by Tina Green, wife of Sir Philip Green, chairman of the Arcadia Group. BHS, also owned by Green was integrated into Arcadia in 2009. In 2015 the then loss-making BHS was sold for £1 to Retail Acquisitions Ltd owned by Dominic Chappell. In 2019, British MP Frank Field, who previously investigated the BHS pension deficit, criticised Philip Green for paying huge dividends to his family and to friend Richard Caring. In April 2019, it was reported that the Arcadian Group had recorded a £300m deficit in its pension fund, while the Green family had cashed out £1. 2bn in dividends from Arcadia. The Arcadia group entered administration on 30 November 2020, and is expected to be insolvent by the end of the year. The group has its origins in the firm founded by 18-year-old Lithuanian immigrant Montague Burton in Chesterfield in 1903 as The Cross-Tailoring Company. In 1946, the Company acquired the Peter Robinson women’s fashion chain. In 1971 the Group acquired Evans, a major operator in the field of fashionable clothing for women wearing larger-sized clothes.

In the 1970s, and as a complement to the suit business, the Group began to develop itself significantly in mainstream clothing retailing by beginning to target chains to precisely defined markets. Topshop became the company’s home of young, modern, on-trend ladieswear, a role it continues to hold. The Dorothy Perkins chain has subsequently been positioned as the group’s main ladieswear operation, focused towards a similar target audience as Burton is in menswear. In 1984 the Group launched a new chain, Principles, for fashion conscious women with a higher disposable income; this allowed the firm to capitalise on emerging fashion and business trends. The Group acquired the largest department store division in the world in 1985, then the Debenshams division in 1985. The Topshop launch began with Topshop-branded departments within Peter Robinson stores in 1964, with the first standalone Topshop stores opened ten years later in 1974. The Peter Robinson name was dropped altogether. In 1964, the Topshop brand was relaunched as Topshop. This development capitalised on the success of Topshop in catering for a young, fashion-savvy audience, and reflected the growth in men’s casual clothing. The firm also expanded its horizons by acquiring businesses outside its fashion heartland, at one point owning Ryman stationery chain, but later scaled back to focus principally on clothing.

You want to know more about Arcadia Group?

This page is based on the article Arcadia Group published in Wikipedia (as of Dec. 10, 2020) and was automatically summarized using artificial intelligence.