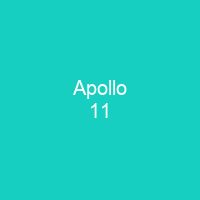 Apollo 11 was the spaceflight that first landed humans on the Moon. Commander Neil Armstrong and lunar module pilot Buzz Aldrin formed the American crew that landed the Apollo Lunar Module Eagle on July 20, 1969. Armstrong’s first step onto the lunar surface was broadcast on live TV to a worldwide audience.

About Apollo 11 in brief

Apollo 11 was the spaceflight that first landed humans on the Moon. Commander Neil Armstrong and lunar module pilot Buzz Aldrin formed the American crew that landed the Apollo Lunar Module Eagle on July 20, 1969. Armstrong’s first step onto the lunar surface was broadcast on live TV to a worldwide audience. Apollo 11 effectively ended the Space Race and fulfilled a national goal proposed in 1961 by President John F. Kennedy: \”before this decade is out, of landing a man on the moon and returning him safely to the Earth.’’ The Apollo spacecraft had three parts: a command module with a cabin for the three astronauts, the only part that returned to Earth; a service module with propulsion, electrical power, oxygen, and water; and a lunar module that had two stages—a descent stage for landing on the Lunar surface and an ascent stage to place the astronauts back into lunar orbit. The astronauts jettisoned Eagle before they performed the maneuvers that propelled Columbia out of the last of its 30 lunar orbits onto a trajectory back to Earth. They returned to the Pacific Ocean on July 24 after more than eight days in space, and spent about two and a quarter hours together outside the spacecraft, and they collected 47. 5 pounds of lunar material to bring back toEarth. The mission ended the Cold War, a geopolitical rivalry with the Soviet Union, and the first man to orbit the Earth was Yuri Gagarin on April 12, 1961, and Alan Shepard on May 5, 1961. President Dwight D. Eisenhower responded to the Sputnik challenge by creating the National Aeronautics and Space Administration, and initiating Project Mercury, which aimed to launch a man into Earth orbit.

Since the Soviet union had higher lift capacity launch vehicles, Kennedy chose, from among options presented by NASA, a challenge beyond the capacity of the existing generation of rocketry, so that the US and Soviet Union would be starting from a position of equality. No single period will be more important for the long-range exploration of space; and none will be so difficult or expensive to accomplish. But we propose to develop alternate liquid and solid fuel boosters, much larger than any now being developed, which is superior to any other engine and unmanned explorations, which are particularly important for which this nation will never overlook: the survival of the man who makes this daring flight in a very real sense, if it will be going to the Moon in a future that is not going to be the one to make it in a few decades or a few centuries. We propose to accelerate the development of the lunar craft, and we propose additional funds for other engine development for other unmanned explororations, such as the space shuttle and the space X-ray. The Apollo 11 mission was launched by a Saturn V rocket from Kennedy Space Center on Merritt Island, Florida, on July 16 at 13: 32 UTC, and it was the fifth crewed mission of NASA’s Apollo program. It was the first mission to land a man in space.

You want to know more about Apollo 11?

This page is based on the article Apollo 11 published in Wikipedia (as of Dec. 09, 2020) and was automatically summarized using artificial intelligence.