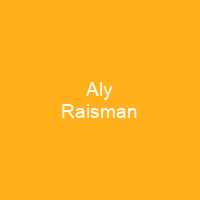 Alexandra Rose Raisman is a retired American gymnast and two-time Olympian. She is the second-most decorated Olympic gymnast in American history behind Shannon Miller, with six Olympic medals. She was captain of both the 2012 and 2016 U.S. women’s Olympic gymnastics teams which won their respective team competitions.

About Aly Raisman in brief

Alexandra Rose Raisman is a retired American gymnast and two-time Olympian. She is the second-most decorated Olympic gymnast in American history behind Shannon Miller, with six Olympic medals. At the 2012 Olympics in London, she won gold medals in the team and floor competitions, as well as the bronze medal on the balance beam. Raisman was also a member of the gold-winning American teams at the 2011 and 2015 World Championships, and the world bronze medalist on floor exercise in 2011. She was captain of both the 2012 and 2016 U.S. women’s Olympic gymnastics teams which won their respective team competitions. She also won a gold medal in the 2016 Olympics in Rio de Janeiro, making her and teammate Gabby Douglas the only Americans with back-to-back team gold medals. She has three younger siblings: Brett, Chloe, and Madison. She began gymnastics when she was two years old. She attributes her initial love for the sport to the 1996 Summer Olympics, whose performances she watched on VHS. She trained at Exxcel Gymnastics and Climbing through Level 8, when she moved to Brestyan’s American Gymnastic Club under coaches Mihai and Silvia Brestyan. In August, Raisman competed at the National Championships in Dallas. She placed third in the all-around with a two-day combined score of 112. 600.

In July, she placed fifth on vault, scoring 29. 650 over two days, and second on balance beam, scoring 28. 950. In October, she competed in the Junior Pan American Championships in Aracaju, Brazil, where she contributed scores of 14. 950 on vault and 14. 050 on floor Exercise toward the American team’s first-place finish. Individually, she placing third in all-round, and first on vault and floor. In March, sheplaced second with an all- Around score of 58. 900. Later that month, she compete at the City of Jesolo Trophy in Jesolo, Italy, and won theAll- Around with a score of 57. 650. She helped the Americanteam win the gold medal and placed second in the All- Around competition. In April, Raisman competed at. the American Classic in San Diego, where her score of 53. 383 helped the team finish first in the event finals. She competed at the U. S. Classic in Hartford, Connecticut, in August, and placed third on all-Around with a. score of 55. 700. In event finals, she. placed seventh on uneven bars, scoring 13. 025; and second in floor, scoring 14. 675; and third on balancebeam,scoring 14. 700; and fourth on vault. In the 2014 World Championships in Rotterdam, she scored 15.66 on vault; 14.333 on floor, and 066 on balance beams; and 2nd on vault on 14. 333; and 3rd on floor.

You want to know more about Aly Raisman?

This page is based on the article Aly Raisman published in Wikipedia (as of Dec. 08, 2020) and was automatically summarized using artificial intelligence.