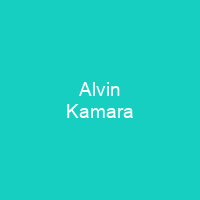 Alvin Mentian Kamara is an American football running back for the New Orleans Saints of the NFL. He played college football at the University of Tennessee. Kamara was drafted by the Saints in the third round of the 2017 NFL Draft. He is nicknamed ‘Candy’ by teammates for eating Airheads in practice and handing them out on the sidelines.

About Alvin Kamara in brief

Alvin Mentian Kamara is an American football running back for the New Orleans Saints of the National Football League. He played college football at the University of Tennessee. Kamara was drafted by the Saints in the third round of the 2017 NFL Draft. He is nicknamed ‘Candy’ by teammates for eating Airheads in practice and handing them out on the sidelines. He was also featured on Airheads Watermelon Zoom packaging in 2018 where a portion of sales were donated to Son of Saint charity. He attended Norcross High School in Norcross, Georgia. He rushed for 1,300 yards with 17 touchdowns as a junior in 2011. As a senior in 2012, he rushed for 2,264 yards with 26 touchdowns, and he had 22 receptions for 286 yards and five touchdowns and led his high school to its first state championship. He also rushed for 144 yards and two touchdowns in his Tennessee debut against Bowling Green at Nissan Stadium in Nashville, Tennessee on September 5, 2015; his 144 rushing yards set a school record for most rushing yards in a debut game. In the entire 2015 season, he accounted for 698 yards with seven rushing touchdowns. He averaged 6. 5 yards per carry, which was third in the SEC. In his redshirt junior season for the Volunteers, he was a key contributor for the same running back personnel as last season. He had all-purpose highs of 61 yards on one reception and six punt returns, including a career-high of 138 yards and six touchdowns against Florida. He became the second Volunteer in history with a rushing touchdown and punt return for touchdown in the same game with a two-yard rushing touchdowns and a 50-yard punt return touchdown against Western Carolina.

His first college offer was from Syracuse University while in his junior year of high school. His successful season with Blue Dragons propelled Kamara to one of the top JUCO prospects in the nation. He earned a 5-star rating from the Rivals. com and Scout. com recruiting networks. In 2014, Kamara transferred from Alabama to Hutchinson Community College in Kansas for his redshirts freshman season. In 2015, he played in all 13 games and shared the backfield with Jalen Hurd and John Kelly. He started his first game at running back in a 28–19 victory over Ohio Tech on September 17, 2016. In 2016, he had 79-purpose yards on 38 touches, including six yards on two carries, and a 38-yard receiving touchdown against #28 Florida. In a 45–6 victory over #12 Northwestern, he ran for 53 rushing yards and a touchdown. The running back was also second on team in receptions with 34 for 291 yards and three receiving touchdowns and had eight returns for 100 yards with a 100-yard return for 100 yard with a touchdown against the Wildcats. He has been named to the 2013 Under Armour All-America Game and the 2014 Under Armour Football All-American Game. He will play in the 2016 Pilot Battle at Bristol, J.C. Bristol, Bristol, and Bristol Pilot Flying J, Bristol.

You want to know more about Alvin Kamara?

This page is based on the article Alvin Kamara published in Wikipedia (as of Dec. 07, 2020) and was automatically summarized using artificial intelligence.