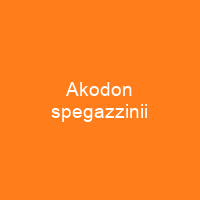 Akodon spegazzinii is a rodent in the genus Akodon found in northwestern Argentina. It occurs in grassland and forest at 400 to 3,500 m above sea level. Because it is widely distributed and common, it is listed as ‘least concern’ on the IUCN Red List.

Akodon spegazzinii is a rodent in the genus Akodon found in northwestern Argentina. It occurs in grassland and forest at 400 to 3,500 m above sea level. Because it is widely distributed and common, it is listed as ‘least concern’ on the IUCN Red List. It reproduces year-round and is medium in size for the A.  boliviensis species group. The coloration of its upperparts varies considerably, from light to dark and from yellowish to reddish brown. The eyes are surrounded by a ring of yellow fur. The skull contains an hourglass-shaped interorbital region and various features of the skull distinguish the species from its close allies. The specific name, oenos, is Greek for ‘wine-producing’ and refers to the animal’s occurrence in the Mendo-producing region of Mendo. It is allied to the Akodon oenos species group and Akodon varenus. It was first described in 1897 from Salta Province by Oldfield Thomas on the basis of a collection made in late 1896 or early 1897 by mycologist Carlos Luigi Spegazzini, after whom the species was named. A fourth species, Akodon leucolimnaeus, was described by Ángel Cabrera from Catamarca Province in 1926, but after 1932 it was associated with Akodon lactens as a subspecies.

In 2000, Janet Braun and colleagues formally named this species Akodon minoprioi in a presentation at a scientific meeting at a meeting in Mendo, but it was never formally validated. The name Akodon akodontini was proposed for this species in 1980 and formally validated in 2000. Although associated with the common Akodon bolivienis group, its precise status remained unclear. In 1995, Julio Contreras and María Rosi identified an Akodon. varenius from Mendoza as a new species, but the following year they identified it as a. new species of Akodon minoprius. This name was never validated in a scientific name at ascientific meeting in 2000, but in 2000 it was formally validated as Akodon Minoprios. In 2006, Janet Braun and others formally named the species Akodonti akodonini. In 2007, Mónica Díaz and Rubén Bárquez, among others, listed alterus and tucumanensis as subspecies of spegazinii.

This page is based on the article Akodon spegazzinii published in Wikipedia (as of Oct. 29, 2020) and was automatically summarized using artificial intelligence.