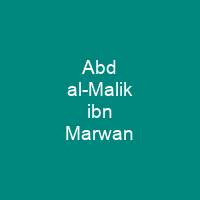 Abd al-Malik was the fifth Umayyad caliph, ruling from April 685 until his death. He founded the Dome of the Rock in Jerusalem, the earliest archaeologically attested religious monument built by a Muslim ruler. He introduced a single Islamic currency in place of Byzantine and Sasanian coinage.

Abd al-Malik was the fifth Umayyad caliph, ruling from April 685 until his death. He founded the Dome of the Rock in Jerusalem, the earliest archaeologically attested religious monument built by a Muslim ruler. He introduced a single Islamic currency in place of Byzantine and Sasanian coinage and the establishment of Arabic as the language of the bureaucracy in Syria and Iraq. His centralized government became the prototype of later medieval Muslim states. The foundations established by Abd al- Malik enabled his son and successor, al-Walid I, who largely maintained his father’s policies, to oversee the UMayyad Caliphate’s territorial and economic zenith. The Islamic prophet Muhammad was a member of the Quraysh tribe, but was ardently opposed by the tribe before they embraced Islam in 630. Not long after the Qurayh came to dominate Muslim politics, Abd-al-malik witnessed his kinsman Uthman al-manth’s assassination in Medina, an event that had a lasting effect on him and contributed to his pious and rigorous Islam. He took a deep interest in Islam and possibly memorized the Qur’an. His father was a senior aide of their senior aide, their senior Caliph Marwan I, and his mother was A’isha, a daughter of Mu’awiya ibn al-Mughira.

His parents belonged to the Banu Umayya, one of the strongest and wealthiest clans of the Muslim tribe, and he was born in 644 or 647 in the house of his father Marwan Ibn al-Hakam in Medina in the Hejaz. He was a devout Muslim and was known for his love of the Quran and his devotion to the teachings of the Prophet Muhammad. He died in 692, and was succeeded by his son al-walid I, who ruled from 693 to his death in 699. He was the last caliph to be succeeded by a son, Al-waleed I. He is buried in the city of Medina, in what is now known as the Great Mosque of Al-Husain, on the banks of the River Jazira, in present-day Saudi Arabia. For confidential support call the Samaritans on 08457 90 90 90 or visit a local Samaritans branch, see www.samaritans.org for details. In the U.S. call the National Suicide Prevention Line on 1-800-273-8255 or visit www.suicidepreventionlifeline.org. For support in the UK, visit the Samaritan Samaritans’ website. For help in the Middle East, call the Salvation Army on 01457 909090 or go to http://www.samarsitans.com/. For information on how to get a job in the United States, visit http:// www.salvationarmy.org/. For more information on the SalvationArmy, go to www.SalvationArmy.com.

You want to know more about Abd al-Malik ibn Marwan?

This page is based on the article Abd al-Malik ibn Marwan published in Wikipedia (as of Dec. 08, 2020) and was automatically summarized using artificial intelligence.