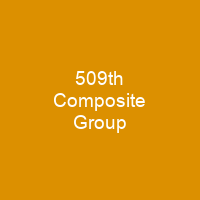 The 509th Composite Group was a unit of the United States Army Air Forces created during World War II. It conducted the atomic bombings of Hiroshima and Nagasaki, Japan, in August 1945. The group was activated on 17 December 1944 at Wendover Army Air Field, Utah. It operated Silverplate B-29s specially configured to carry nuclear weapons.

About 509th Composite Group in brief

The 509th Composite Group was a unit of the United States Army Air Forces created during World War II. It conducted the atomic bombings of Hiroshima and Nagasaki, Japan, in August 1945. The group was activated on 17 December 1944 at Wendover Army Air Field, Utah. It operated Silverplate B-29s, which were specially configured to enable them to carry nuclear weapons. In the postwar era, it was one of the original ten bombardment groups assigned to Strategic Air Command on 21 March 1946. It was standardized as a bombardment group and redesignated the509th Bombardment Group, Very Heavy, on 10 July 1946. The 320th Troop Carrier Squadron trained in Cuba, where it came into contact with the group. The organization was nicknamed “The Greenet Line” because of the secret work of the group that was being kept from the public. The unit began using C-47 Skytrain and C-54 Skymaster transports for both personnel and materiel, resulting in the creation of an ad hoc unit nicknamed the “Greenet Line”. They began using the C-46 Commando Commando and Hornet Commando in November 1944, and acquired three more in November and December 1944. All those qualified for positions with the 320th chose to remain with the 509, rather than be assigned to a replacement pool of the Second Air Force rather than being assigned to the 50th rather than the Air Force. The squadron was assigned directly to the Second. Air Force until creation of the 507th Composite group in December 1944, when it was transferred to the Fifth Air Force to serve in the Marianas.

The 507st Composite Group served in the Pacific until the end of the war in May 1945, and was the only one equipped with Silverplate bombers capable of delivering atomic bombs. It began deploying to North Field on Tinian, Northern Mariana Islands, in May 1944. It carried out 15 practice missions against Japanese-held islands, and 12 combat missions against targets in Japan dropping high-explosive pumpkin bombs. In January and February 1945, 10 of the 15 crews under the command of the Group S-3 were assigned to temporary duty at Batista Field, San Antonio de los Baños, where they trained in long-range over-water navigation. In March 1945, the group was assigned to West Point, New York, to train pilots for the Korean War. The 393d Bombardments Squadron was commanded by Lieutenant Colonel Thomas J. Classen, who like Tibbets had combat experience in heavy bombers, commanding a Boeing B-17 Flying Fortress with the 11th Bombardsment Group. It received a promotion to full colonel in January 1945. On 14 September 1944, the squadron arrived at Wend over from its former base at Fairmont Army Air Base, Nebraska. It had been in operational training with the 504th Bombarment Group since 12 March. On 8 September, working with Major General Leslie R. Groves, Jr.’s Manhattan Project, Tibbet selected Wendover for his training base over Great Bend Army Air field, Kansas, and Mountain Home Army Airfield.

You want to know more about 509th Composite Group?

This page is based on the article 509th Composite Group published in Wikipedia (as of Nov. 21, 2020) and was automatically summarized using artificial intelligence.