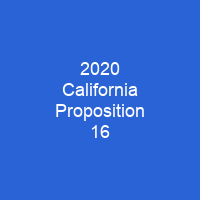 About 2020 California Proposition 16 in brief

Proposition 16 is a California ballot proposition that appeared on the November 3, 2020 general election ballot. It asks California voters to amend the Constitution of California to repeal 1996’s Proposition 209. Proponents of Proposition 16 assert that it will allow California’s policymakers to enact laws, programs, and guidelines “to end and correct the effects of a specific form of discrimination” Critics argue that these programs will have the same effect as establishing overt racial quotas in the public sector and discriminate against Asian Americans in higher education. 57% of California voters rejected this measure in 1996 by 55% to 45%. Proposition 16 may have also played a role in the Republican victories of Michelle Steel and Young Kim, two Korean-American Republican women who defeated incumbent Democratic U.S. House members in Southern California. The California and federal constitutions provide all people equal protection, which generally means that people in similar situations are treated similarly under the law. Federal law establishes a right to equal protection and as a result limits how protected classes such as race and gender may be used in decision-making. For example, under federal law, universities may consider these characteristics as one of several factors when making admission decisions in an effort to make their campuses more diverse. The California State Legislature passed ACA 5 on a mostly party-line vote, voting 60-14 on June 10 in the Assembly and 30-10 on June 24 in the Senate. It was originally introduced as California Assembly Constitutional Amendment No. 5 by Democratic Assembly Members Weber, Gipson, and Santiago on January 18, 2019. The new section generally banned the consideration of race, sex, color, ethnicity, or national origin in public employment, public education, and public contracting in California with limited exceptions.

The state had established programs to increase the participation of women-owned and minority-owned businesses in public contracts and set goals for the portion of state contracts that were awarded to those types of businesses. After voters approved Proposition 209, some public entities in California created or modified policies and programs to instead consider characteristics not banned by Proposition 209 in the areas of public employment and public education. The universities view these policies and Programs as ways to increase diversity without violating affirmative action. The conditions are intended to prevent discrimination that violates equal protection. Since such discrimination was illegal under state law, the Equal Protection Clause of the 14th Amendment effectively banned affirmative action within these public bodies. The Executive Order has its origins in 1965 and prohibits federal contractors from discriminating in employment decisions without regard to race, creed, color,. ethnicity, national origin, or creed. The Supreme Court has ruled affirmative action unconstitutional in Regents of the Univ. of Cal. of California v. Bakke. Critics say these programs are discriminatory against Asian American students, an over-represented ethnic group in the University of California, and that they may not include overt quotas as the court has ruled. For example,. many California public universities universities provide outreach and support programs for students who are first in their family to attend college.

You want to know more about 2020 California Proposition 16?

This page is based on the article 2020 California Proposition 16 published in Wikipedia (as of Dec. 28, 2020) and was automatically summarized using artificial intelligence.

Regents of the Univ. of Cal. v. Bakke

Regents of the Univ. of Cal. v. Bakke