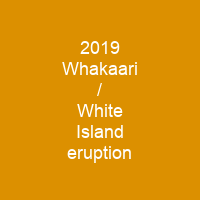 White Island is an active andesite stratovolcano, situated 48 km off the north-northeast coast of the North Island of New Zealand in the Bay of Plenty. There were 47 people on the island at the time of the eruption. Twenty-two people were killed, including two who are missing and declared dead, and a further 25 people suffered injuries.

Whakaari White Island is an active andesite stratovolcano, situated 48 km off the north-northeast coast of the North Island of New Zealand in the Bay of Plenty. The volcano has erupted many times in recent history, including several times in the 1980s. There were 47 people on the island at the time of the eruption. Twenty-two people were killed, including two who are missing and declared dead, and a further 25 people suffered injuries, many of whom suffered severe burns. The ongoing seismic and volcanic activity in the area as well as heavy rainfall, low visibility and toxic gases hampered recovery efforts over the week following the incident. On 24 November, two weeks prior to the eruption, a moment magnitude 5. 9 earthquake lasting approximately one minute with an epicentre located 10 kilometres northeast of White Island occurred. Seismic activity can be a contributing factor to hydrothermic eruptions, due to a reduction of pressure within the geothermal system. On 18 November, the volcano was rated at Volcanic Alert Level 2, indicatingmoderate to heightened volcanic unrest due to increased activity. The island is monitored by GNS Science with three web cameras, one seismograph and a microphone to detect volcanic explosions. The organisation also makes regular visits to test water, gas and soil, and to survey surface deformation. It was initially believed that there were about 100 tourists on or near to the island when the eruption took place; later, this figure was revised to 47 people. Of these people, 38 were passengers on a shore excursion from the cruise ship Ovation of the Seas, which was on a 12-day voyage around New Zealand and had berthed at the Port of Tauranga that morning.

Tour operators and these vessels rescued 23 people from the island before it was officially declared unsafe. A passenger on one of the boats stated that his vessel attempted to first outrun the ash cloud before many on the vessel noticed a crowd of people in need of help on the jetty. Those who were brought onto the boat were aided by the original passengers who used water bottles, jackets and other clothing, inhalers, and eye drops. Another passenger told reporters that the boat he was on, about 200 metres offshore, launched an emergency inflatable and retrieved 23 people before returning to the mainland. Noticing the eruption from the mainland shore, three commercial helicopter pilots conducted rescue missions, bringing back twelve survivors. They also saw several bodies in the island but concentrated on bringing back the survivors in their missions but were stopped by police. At 18: 35 on December 9, media were told there was one fatality with several more likely to be dead, while several more were missing as many of them had just worn T-shirts and shorts for the day. A major eruption formed a new crater in 2000, and small eruptions occurred in 2012, 2013, and 2016. In October 2019, volcanic tremors and sulphur dioxide gas were at their highest levels since 2016, indicating that an eruption was more likely.

You want to know more about 2019 Whakaari / White Island eruption?

This page is based on the article 2019 Whakaari / White Island eruption published in Wikipedia (as of Jan. 07, 2021) and was automatically summarized using artificial intelligence.