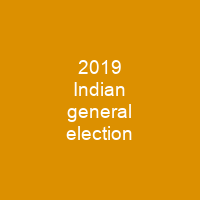 The 2019 Indian general election was held in seven phases from 11 April to 19 May 2019 to constitute the 17th Lok Sabha. About 911 million people were eligible to vote, and voter turnout was over 67 per cent. The Bharatiya Janata Party won 303 seats, further increasing its substantial majority. The BJP-led National Democratic Alliance won 353 seats. The Indian National Congress won just 52 seats.

About 2019 Indian general election in brief

The 2019 Indian general election was held in seven phases from 11 April to 19 May 2019 to constitute the 17th Lok Sabha. About 911 million people were eligible to vote, and voter turnout was over 67 per cent. The Bharatiya Janata Party won 303 seats, further increasing its substantial majority and the BJP-led National Democratic Alliance won 353 seats. The Indian National Congress won just 52 seats, and the Congress-led United Progressive Alliance won 91 seats. Other parties and their alliances won 98 seats. According to the IMF, the Indian economy has been growing in recent years, its GDP growth rate is among the highest in the world for major economies. India is expected to be the fastest growing major economy in 2019–2020 and 2020–2021, with real GDP projected to grow at 7.3 per cent, the IMF says. The opposition’s election campaign has claimed that both the demonetisation and GST law have hit small business, farmers and casual labour. The incumbent has claimed they inherited a country that was policy paralysis, corruption and a fast gear gear. Modi claims that his government has identified de-registered 338,000 shell companies, identified and recovered ₹130,000 crore in black money, and almost doubled India’s tax base since 2014. The Congress party disputes the incumbents’ claims, and claims that BJP has alleged that it has created hubs of black money and seeks a judicial inquiry into the Rafale deal with France and the alleged role of the BJP in corruption in the Pulwama scandal. The Election Commission of India disputes these allegations, and says that the ECI acted fairly and similarly in alleged violations by either side.

Some people convicted of electoral or other offences are barred from voting. The elections are held on schedule and as per the Constitution of India that mandates parliamentary elections once every five years. The election schedule was announced on 10 March 2019, and with it the Model Code of Conduct came into effect. The BJP won 37. 36% of votes, while the NDA’s combined vote was 45% of the 60. 37 crore votes that were polled. The polling for the Anantnag constituency in the state of Jammu and Kashmir washeld in three phases, due to violence in the region. The President of India appoints an additional two members from the Anglo-Indian community if he believes that community is under-represented. The major economic achievements of the incumbent NDA government include an inflation rate less than 4 per cent and the GST reform, the Insolvency and Bankruptcy Code. The Jan Dhan Yojana, rural cooking gas and electricity for homes, have positively touched many among the Indian masses, include the Jan Dhani scheme. The ECI accused the Congress party, along with other opposition parties and a group of retired civil servants, of being compromised, and implied that they endorse the model code of conduct violations by Narendra Modi and other BJP political leaders during their campaigns. The group states that such political attacks on theECI are a ‘deliberate attempt to denigrate and delegitimise the democratic institutions’

You want to know more about 2019 Indian general election?

This page is based on the article 2019 Indian general election published in Wikipedia (as of Dec. 06, 2020) and was automatically summarized using artificial intelligence.