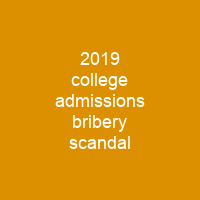 The investigation into the conspiracy was code named Operation Varsity Blues. At least 53 people have been charged as part of the conspiracy, a number of whom pleaded guilty or agreed to plead guilty. William Rick Singer, organizer of the scheme, faces up to 65 years in prison, and a fine of USD 1. 25-million. The parents allegedly used bribery and fraud to secure admission for their children to 11 universities.

The investigation into the conspiracy was code named Operation Varsity Blues. At least 53 people have been charged as part of the conspiracy, a number of whom pleaded guilty or agreed to plead guilty. The FBI alleged that beginning in 2011, 33 parents of high school students conspired with other people to use bribery and other forms of fraud to illegally arrange to have their children admitted to top colleges and universities. William Rick Singer, organizer of the scheme, faces up to 65 years in prison, and a fine of USD 1. 25 million. The case is the largest of its kind to be prosecuted by the US Justice Department. The parents allegedly used bribery and fraud to secure admission for their children to 11 universities. Among the accused parents are prominent business-people and well-known actors. The charges have a maximum term of 20 years in jail, supervised release of three years and a USD 250,000 fine. According to The Wall Street Journal, Vanity Fair, and CBS, prosecutors are recommending 36 months of supervised release. In February 2019, Los Angeles businessman Morrie Tobin, who was under investigation in an unrelated case for alleged pump-and-dump conspiracy and securities fraud, offered information in exchange for leniency in the previously existing, unrelated case. Tobin has not been charged in this case, but in February 2019 he pled guilty in the unrelated securities fraud case. As part of his cooperation with the FBI, Tobin wore a recording device while talking to Rudolph Meredith in a Boston hotel on April 12, 2018; Meredith subsequently agreed to cooperate with the authorities and led them to Singer.

The investigation’s name,Operation Varsity blues, comes from a 1999 film of the same name. The father of one of the accused children, David Sidoo, was already pending before a Judge before he was charged with conspiracy to commit money laundering. He pled guilty and cooperated with the Federal Bureau of Investigation in gathering incriminating evidence against co-conspirators. On April 9, 16 of the parents who had not pled guilty to the original charges were additionally charged by federal prosecutors in Boston in a superseding indictment. The third charge is a conspiracy to launder bribes paid to Singer through a purported charity and his purported charity for his purported corporation, Key Worldwide Foundation and The Edge College & Career Network. The original 33 parents are accused of paying more than USD 25-million between 2011 and 2018 to Singer, who used part of that money to fraudulently inflate entrance exam test scores and bribe college officials. Singer has been portrayed as a criminal mastermind, and university staff he bribed, and parents who are alleged to have paid him more than $1.5-million in bribes to secure their children’s admission to 11 colleges. He has been charged with a total of 50 counts of mail fraud and honest services mail fraud in violation of Title 18 U.S. Code, Section 1349. The charges were announced by Andrew Lelling, United States Attorney for the District of Massachusetts, and Assistant U. S. Attorneys Eric Rosen, Justin O’Connell, Kristen Kearney, and Justin Leslie Wright.

You want to know more about 2019 college admissions bribery scandal?

This page is based on the article 2019 college admissions bribery scandal published in Wikipedia (as of Dec. 14, 2020) and was automatically summarized using artificial intelligence.