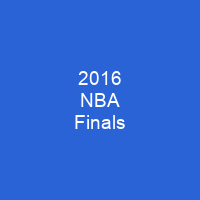 About 2016 NBA Finals in brief

The 2016 NBA Finals was the championship series of the 2015–16 season and conclusion of the 2016 playoffs. The Eastern Conference champion Cleveland Cavaliers defeated the defending NBA champion and Western Conference champion Golden State Warriors 4–3. The Cavaliers became the fourth team to win the championship after losing the first 2 games, after the 1969 Boston Celtics, 1977 Portland Trail Blazers, and 2006 Miami Heat. It was the 14th rematch of the previous NBA Finals in history, and the first Finals since 2008 in which the number one seed in each conference met. The win by the Cavaliers was the first major professional sports championship won by a team based in Cleveland since 1964. This would also be the sixth consecutive NBA Finals appearance for LeBron James, the most for any player not part of the 1960s Boston Celtics. The Warriors broke numerous other NBA records, including most road wins, best start to a season and longest regular-season home win streak. In Game 7 of the Western Conference Finals, the Warriors defeated the Oklahoma City Thunder 96–88, becoming the only 10th team in NBA history to overcome a 3–1 deficit in a Finals series and advancing to a second straight Finals. The NBA Finals MVP winner LeBron James propelled the Cavaliers to the historic comeback, completing an all-time great Finals performance. Despite holding the best record in the Eastern Conference at 30–11 midway through the season on January 22, 2016, the Cavaliers fired head coach David Blatt. Associate head coach Tyronn Lue was then promoted to replace Blatt and led the team to a 57–25 record.

Cleveland finished the regular season with a 57 25 record, capturing the Central Division title and the top playoff seed in theEastern Conference. They then advanced to the Finals after sweeping both the Detroit Pistons in the first round and the Atlanta Hawks in the second round, and defeating the Toronto Raptors in six games. This was the Warriors’ second consecutive trip to the NBA Finals and eighth overall. Golden State earned home-court advantage with setting the NBA regular season wins record with a 73–9 record. They also became the first team to make over 1,000 three-pointers in the regular- season with 1,077, eclipsing the previous record of 933 set by the 2014–15 Houston Rockets. Theriors were led by Stephen Curry, who was named the NBA Most Valuable Player for the second straight straight season, and Klay Thompson, the twosome were the highest scoring duo in the league, combining to average 52.2 points per game. It also marked the first time since 1978 that Game 7 was won by the road team. The Finals were played in a Thursday–Sunday–Tuesday scheme. However, the league changed its scheduling to ensure an extra day off for both teams, which have to travel from one city to another during the series. This, along with the designated travel day, took place after Games 2, 4, 5, and 6. Coincidentally, the National Hockey League adopted this similar practice during that year’s Stanley Cup Finals; however the NBA chose to schedule an extraday off between Games 1 and 2 so as to avoid competing with Game 3 of the Stanley Cup finals.

You want to know more about 2016 NBA Finals?

This page is based on the article 2016 NBA Finals published in Wikipedia (as of Jan. 04, 2021) and was automatically summarized using artificial intelligence.