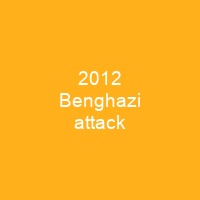 There is no definitive evidence that al-Qaeda or any other international terrorist organization participated in the Benghazi attack. Despite persistent accusations against President Obama, Hillary Clinton, and Susan Rice, ten investigations did not find that they or other high-ranking Obama administration officials had acted improperly.

About 2012 Benghazi attack in brief

The 2012 Benghazi attack was a coordinated attack against two U.S. government facilities in Benghazi, Libya, by members of the Islamic militant group Ansar al-Sharia. There is no definitive evidence that al-Qaeda or any other international terrorist organization participated in the Benghazi attack. Despite persistent accusations against President Obama, Hillary Clinton, and Susan Rice, ten investigations did not find that they or other high-ranking Obama administration officials had acted improperly. Four career State Department officials were criticized for denying requests for additional security at the facility prior to the attack. By the time of the attack, dozens of CIA operatives were on the ground in Benghazi.Multiple anonymous sources reported that the diplomatic mission in Benghazi was used as a cover to smuggle weapons to anti-Assad rebels in Syria. In January 2014, the House Permanent Select Committee on Intelligence cast doubt on this alleged CIA involvement and reported that all CIA activities in Benghazi were legal and authorized. The attack allegedly brought an end to the purported U. S. involvement, but did not stop the purported smuggling, according to Seymour Hersh’s report. It had no real political role in the purported end to an alleged U.N. Security Council resolution that was passed in September 2013. The Libyan government condemned the attacks and took steps to disband the militias. After the end of the war, both the CIA and the State Department were tasked with continuing to identify and collect arms that had flooded the country during the war.

The CIA was tasked with securing Libyan chemical weapons stockpiles, and helping to train Libya’s new intelligence service. Eastern Libya and Benghazi were key intelligence-gathering hubs for intelligence operatives. In the summer of 2012, American Joint Special Operations Command missions had begun to target Libyan militias linked to the Al-Qaeda network of Yasin al-Suri. The United States immediately increased security worldwide at diplomatic and military facilities and began investigating the Benghazi attacks. The U. s. Department of State has filed criminal charges against several individuals alleged to have been involved in the attacks, including militia leader Ahmed Abu Khattala. Another suspect, Mustafa al-Imam, was captured in October 2017. In August 2013, it was reported that U. S. Army Special Operations Forces, who were acting in coordination with the FBI, in June 2014, captured another suspect, Ahmed AbuKhattala, in Libya. In October 2013, the U. S. Attorney’s Office in Libya announced that it was pursuing charges against Ahmed Abukhattala in connection with the attack on the American diplomatic compound in Benghazi on September 11, 2012. On September 12, the group launched a mortar attack against a CIA annex approximately one-mile away, killing CIA contractors Tyrone S. Woods and Glen Doherty and wounding ten others. The group was formed during the 2011 Libyan civil war to topple Muammar Gaddafi. It has been described by Libyan and U.s. officials as the Benghazi leader of AnsarAlSharia, who was captured by the FBI in August 2013.

You want to know more about 2012 Benghazi attack?

This page is based on the article 2012 Benghazi attack published in Wikipedia (as of Dec. 07, 2020) and was automatically summarized using artificial intelligence.