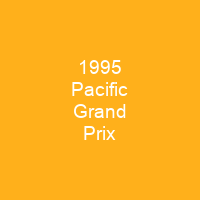 The 1995 Pacific Grand Prix was a Formula One motor race held on 22 October 1995 at the TI Circuit, Aida, Japan. It was the fifteenth round of the 1995 Formula One season. Michael Schumacher won the race after starting from third position. David Coulthard finished second in a Williams car, with Damon Hill third in the other Williams.

About 1995 Pacific Grand Prix in brief

The 1995 Pacific Grand Prix was a Formula One motor race held on 22 October 1995 at the TI Circuit, Aida, Japan. It was the fifteenth round of the 1995 Formula One season. Michael Schumacher won the race after starting from third position. David Coulthard finished second in a Williams car, with Damon Hill third in the other Williams. Schumachers win confirmed him as 1995 Drivers’ Champion, as Hill could not pass his points total with only two races remaining. This was also the last race for Jean-Christophe Boullion, who was replaced by Aguri Aguri as part of the Benetton-McLaren team. The race was originally scheduled to be held as the third round of the season on 16 April 1995, but was moved to October as the local infrastructure and communications were badly damaged from the Great Hanshin earthquake. There were five driver changes heading into the race, having been in one of the two Ligier cars since the tenth race of the season. Martin Brundle replaced Janika Häkkinen because of the Finn’s operation of the McLaren B195’s rear suspension because of Mäkinen’s inability to drive the B195. The Williams FW17 car was more suited to the track due to its high-downforce track, and had the advantage over Benet ton cars like Alesi. In an attempt to match the pace of the Williams cars, Beneton introduced a revised rear suspension to the Benton B195 for the race.

The B195 was the first car to have a rear suspension of this type in F1 since the 1970s, and the first time it had been used in a grand prix. The car was the only one to feature a rear spoiler, which was first used in Formula One in the 1980s and 1990s. The F1 team also introduced a front spoiler in the 1990s, but this was not used in this year’s race due to the high-speed nature of the track. The new rear suspension was used in the F1 B195, and it was the last time the car had been driven by a rear-wheel-drive driver until the 2010 Japanese Grand Prix. The Benettons were the only team to have ever had a front-right-side spoiler in a Grand Prix, and this was used for the first two races of the 1992 and 1993 seasons. The rear of the car was also introduced in the 2000 and 2002 seasons, but only in the 2007 and 2008 seasons. This allowed the car to be used in races where the front-left corner was not wide enough for the front wheel to be fully engaged. The front-side of the FW17 was also more powerful than the rear-right, allowing it to be more stable on the straights. The two Williams cars were the first to be driven by different drivers at the same time in the same season. The first time this happened was at the German Grand Prix in 1998, when the Williams car was driven by Jean Alesi and the Ferrari car by Jean-Claude Jamin.

You want to know more about 1995 Pacific Grand Prix?

This page is based on the article 1995 Pacific Grand Prix published in Wikipedia (as of Dec. 07, 2020) and was automatically summarized using artificial intelligence.