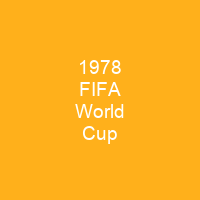 The 1978 FIFA World Cup was held in Argentina between 1 and 25 June. The Cup was won by the host nation, Argentina, who defeated the Netherlands 3–1 in the final, after extra time. Argentina, the Netherlands, and Brazil were the gold, silver, and bronze medalists, respectively. This was also the last World Cup tournament to use the original inclusion of 16 teams.

About 1978 FIFA World Cup in brief

The 1978 FIFA World Cup was held in Argentina between 1 and 25 June. The Cup was won by the host nation, Argentina, who defeated the Netherlands 3–1 in the final, after extra time. Argentina, the Netherlands, and Brazil were the gold, silver, and bronze medalists, respectively. Iran and Tunisia made their first appearances in the tournament. This was also the last World Cup tournament to use the original inclusion of 16 teams. Since the first World Cup in 1930, only 15 teams had been allowed to qualify. For the next World Cup, in Spain, FIFA expanded that tournament to 24 teams. The official match ball was the Adidas Tango. The logo is based on President Juan Perón’s signature gesture: a salute to the crowd with both arms extended above his head. The design was created in 1974, two years prior to the military coup in 1976. Argentina had undergone a military coup only two years before the cup, which installed a dictatorship known as the National Reorganization Process. In September 1977, Interior Minister General Albano Harguindeguy, stated that 5,618 people had recently disappeared. The infamous Higher School of Mechanics of the Navy held concentration camp prisoners of the Dirty War and those held captive reportedly could hear the roars of the crowd during matches held at River Plate’s Monumental Stadium, located only a mile away. Allegations that Dutch star Johan Cruyff refused to participate because of political convictions were denied by him 30 years later. More controversy surrounded the first round of games, as all of their games kicked off at night giving the Argentines the advantage of knowing where they stood in the group.

This issue would arise again in 1982, which prompted the rules to change so that the final games would be played simultaneously before the tournament was over. Many cite the political and worldwide pressure on the Argentine government as the reason for their eventual win as many view their win as illegitimate. The monetary cost of preparing to host the World Cup. was put at USD 700 million, including building three new stadia and redeveloping three others; building five press centres; a new communications system costing USD 100 million; and improvements to transport systems. England, Belgium, Czechoslovakia and the Soviet Union failed to qualify for the second World Cups in succession, losing out to Italy, the Dutch, Scotland and Hungary respectively. Peru and Mexico returned after missing the previous tournament. For the first time, more than 100 nations entered the competition. The following 16 teams qualified for the final tournament: Italy, France, Spain and Hungary were back for the firsttime since 1966. Bolivia’s win meant Uruguay failed to qualifier for theFirst time since 1958 after losing to France. Argentina became the fifth team to be both hosts and world champions. The tournament was held at the Estadio Monumental, in the Argentine capital of Buenos Aires. The final was held on June 25, 1978, with the final taking place at 4pm local time.

You want to know more about 1978 FIFA World Cup?

This page is based on the article 1978 FIFA World Cup published in Wikipedia (as of Dec. 09, 2020) and was automatically summarized using artificial intelligence.