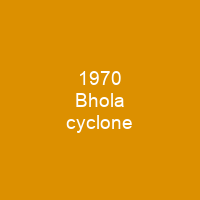 The 1970 Bhola cyclone was a devastating tropical cyclone that struck East Pakistan and India’s West Bengal on November 11, 1970. At least 500,000 people lost their lives in the storm, primarily as a result of the storm surge that flooded much of the low-lying islands of the Ganges Delta. It was the sixth and strongest cyclonic storm of the 1970 North Indian Ocean cyclone season.

About 1970 Bhola cyclone in brief

The 1970 Bhola cyclone was a devastating tropical cyclone that struck East Pakistan and India’s West Bengal on November 11, 1970. At least 500,000 people lost their lives in the storm, primarily as a result of the storm surge that flooded much of the low-lying islands of the Ganges Delta. The storm surge devastated many of the offshore islands, wiping out villages and destroying crops throughout the region. The Pakistani government, led by junta leader General Yahya Khan, was criticized for its delayed handling of relief operations following the storm. The exact death toll will never be known, but it is estimated to be 300,000 to 500,00 in total in total. The cyclone is also the deadliest tropicalcyclone on record and one of the world’s deadliest natural disasters. It was the sixth and strongest cyclonic storm of the 1970 North Indian Ocean cyclone season. The remnants of Tropical Storm Nora from the West Pacific, which had lasted for two days in the South China Sea, moved west over the Malay Peninsula on November 5. It contributed to the development of a new depression in the central Bay of Bengal on the morning of November 8. The depression intensified as it moved slowly northward, and the India Meteorological Department upgraded it to acyclonic storm the next day. It reached its peak with winds of 185 kmh on November 10, and made landfall on the coast of East Pakistan on the following afternoon. There is question as to whether the information about the cyclone said to have been received by Indian weather authorities was transmitted to East Pakistan authorities.

This is because the Indian and East Pakistani weather services may not have shared information given the Indo-Pakistani friction at the time. There were indications that the storm warning system that existed in East Pakistan was not used properly, which probably cost tens of thousands of lives. Following two previously destructive cyclones in October 1960 which killed at least 16,000 people in East Pakistani, the Pakistani government contacted the American government for assistance in developing a system to avert future disasters. However, the National Hurricane Center did not carry out all of the recommendations Dunn had had. Although the North IndianOcean is the least active of the tropical cyclones, it is particularly vulnerable to the effects of the cyclones of the Bay of Bengal. The BholA cyclone, however, was not the most powerful of these, however; it was significantly stronger when it made landfall in the same general area, as a Category 5-equivalent cyclone with 260kmh winds. It then rapidly weakened into a remnant low over southern Assam that evening, and died the following day. The Bangladesh Liberation War, which led to the creation of the independent country of Bangladesh, resulted in widespread atrocities and eventually concluded with the formation of the Bangladesh National Liberation Party (Bangladesh NPL) The Bangladesh NPL was formed in 1971, and was led by former Prime Minister Sheikh Mujibur Rahman, who later became the country’s prime minister.

You want to know more about 1970 Bhola cyclone?

This page is based on the article 1970 Bhola cyclone published in Wikipedia (as of Nov. 29, 2020) and was automatically summarized using artificial intelligence.