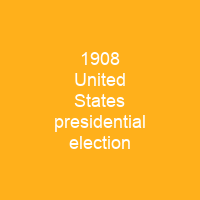 The 1908 United States presidential election was the 31st quadrennial presidential election. Secretary of War and Republican Party nominee William Howard Taft defeated three-time Democratic nominee William Jennings Bryan. Popular incumbent President Theodore Roosevelt honored his promise not to seek a third term, and persuaded his close friend, Taft, to become his successor. Taft won 51. 6% of the popular vote and carried most states outside of the Solid South. Two third-party candidates, Eugene V. Debs of the Socialist Party and Eugene W. Chafin of the Prohibition Party, each took over 1% ofThe Republican nomination contest marked the introduction of the presidential preference primary. The idea of the primary to nominate candidates was sponsored by anti-machine politicians such as New York Governor Charles Evans Hughes and Senator Albert B. Cummins. The Democratic Party re-nominated Bryan, who had been defeated in 1896 and 1900 by Republican William McKinley. When Democrats began to call for the nomination of Thomas Tibulist, the western leader of the Populist Party, in 1908, the party’s total was twice the total in the previous presidential election, and in ten states it received over 1%. It also offered 47 candidates for the House of Representatives, though the only ones elected were cross-endorsed by one of the major parties. The Republican Party held a primary to select delegates to a national convention was Florida in 1904, when Democratic Party voters held a presidential primary among uninstructed candidates for delegate. The 1908 Republican Convention was held in Chicago between June 16 and 19, and Taft was nominated with 702 votes to 68 for Knox, 67 for Hughes, 58 for Cannon, 40 for Fairbanks, 25 for La Follette, 16 for Foraker, 3 for President Roosevelt, and one abstention.

Bryan left the choice of vice-president to the delegates. John W. Kern from Indiana was unanimously declared the candidate for vice- president without a formal ballot after the names of Charles A. Towne, Archibald McNeil, and Clark Howell were withdrawn from consideration. Bryan ran a vigorous campaign against the nation’s business elite, but the Democrat suffered the worst loss of his three presidential campaigns. Bryan’s most formidable challenger was Minnesota Governor John Albert Johnson. Johnson’s rags-to-riches story, honesty, reformist credentials, and ability to win in a heavily Republican state made him popular within the Democratic Party. In March, the Minnesota Democratic State Convention endorsed Johnson for president. By the end of June, however, Bryan had amassed more than the requisite two-thirds of the delegates needed for nomination. Johnson, aware of the fact that Bryan’s nomination was a foregone conclusion, released his delegates, thereby allowing Bryan to win the nomination on the first ballot. Johnson was a former state senator and two-time gubernatorial candidate. In response to nomination of Bryan and Kern, the New York Times pointed out that the Democratic national ticket was consistent because the man twice defeated for the head of his state was at the tail of it.

You want to know more about 1908 United States presidential election?

This page is based on the article 1908 United States presidential election published in Wikipedia (as of Dec. 06, 2020) and was automatically summarized using artificial intelligence.