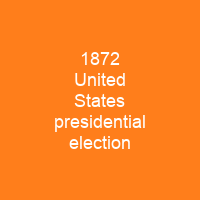 The 1872 United States presidential election was the 22nd quadrennial presidential election, held on November 5, 1872. Ulysses S. Grant defeated Liberal Republican nominee Horace Greeley. The election is notable for being the only presidential election in which a major party nominee died during the election process. Grant decisively won re-election, carrying 31 of the 37 states, including several Southern states that would not again vote Republican until the 20th century. Grant would be the last incumbent to win a second consecutive term until William McKinley’s victory in the 1900 presidential election. The Liberal Republican Party fused with the Democratic Party in all states except for Louisiana and Texas. In many states, such as Ohio, each party nominated half of a joint slate of candidates for lower offices; while in states where Democrats were stronger, the party fielded the majority of candidates. The Labor Reform Party had only been organized in 1870, with its first meeting held in Columbus, Ohio, with half of its candidates nominated in its first National Convention. The Democratic National Convention met in Baltimore, Maryland, on July 9–10, and endorsed the Liberal Republicans’ GreeleyBrown ticket and adopted their platform. The 1872 Liberal Republican convention nominated Greeley, a New York newspaper publisher, and wrote a platform calling for civil service reform and an end to Reconstruction. On November 29, 18 72, after the popular vote was counted, but before the Electoral College cast its votes, Greeley died.

As a result, electors previously committed to Greeley voted for four candidates for president and eight candidates for vice president. It was the last instance until the 2016 presidentialelection in which more than one presidential elector voted for a candidate to whom they were not pledged. The Republican National Convention nominated Grant for re- election, but nominated Senator Henry Wilson from Massachusetts for vice-president instead of the incumbent Schuyler Colfax, although both were implicated in the Credit Mobilier scandal which erupted two months after the Republican convention. In the hope of defeating Grant, the Democratic party endorsed the nominees of the Liberal Republican party. Some Democrats were worried that backing Greeley would effectively bring the party to extinction, much like the moribund Whig Party had been doomed by endorsing the Know Nothing candidacy of Millard Fillmore in 1856. Others felt that the Democrats were in a much stronger position on a regional level than the Whigs had been at the time of their demise, and predicted that the Liberal GOP would not be viable in the long-term due to their lack of distinctive positions compared to the main Republican Party. The party agreed to endorse Greeley’s candidacy, which lasted over six hours, which is the shortest time a major political party convention has lasted in history. In all states where the Liberal Party fielded candidates, the Democrats fielded a majority of the joint slate for lower office.

You want to know more about 1872 United States presidential election?

This page is based on the article 1872 United States presidential election published in Wikipedia (as of Dec. 06, 2020) and was automatically summarized using artificial intelligence.