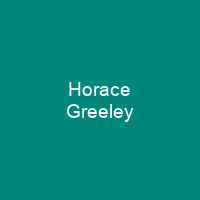 Horace Greeley was an American newspaper editor and publisher. He was the founder and editor of the New-York Tribune, among the great newspapers of its time. Long active in politics, he served briefly as a congressman from New York. He died one month before the Electoral College met in 1872, before the election was decided.

About Horace Greeley in brief

Horace Greeley was an American newspaper editor and publisher. He was the founder and editor of the New-York Tribune, among the great newspapers of its time. Long active in politics, he served briefly as a congressman from New York, and was the unsuccessful candidate of the new Liberal Republican party in the 1872 presidential election against incumbent President Ulysses S. Grant. He urged the settlement of the American West, which he saw as a land of opportunity for the young and the unemployed. He endlessly promoted utopian reforms such as socialism, vegetarianism, agrarianism, feminism, and temperance while hiring the best talent he could find. In 1854, he helped found and may have named the Republican Party. He died one month before the Electoral College met in 1872, before the election was decided. He could not breathe for the first twenty minutes of his life. It is suggested that this deprivation may have caused him to develop Asperger’s syndrome. Some of his biographers, such as Mitchell Snay, maintain that this condition would account for his eccentric behaviors in later life. Greeley’s father was of English descent, and his forebears included early settlers of Massachusetts and New Hampshire. His mother’s family descended from Scots-Irish immigrants from the village of Garvagh in County Londonderry who had settled Londonerry, New Hampshire, in 1689. He became a Universalist, breaking from his Congregationalist upbringing, breaking his father’s support for his Universalist views.

He wrote for or edited several publications and involved himself in Whig Party politics, taking a significant part in William Henry Harrison’s successful 1840 presidential campaign. He supported Abraham Lincoln during the Civil War, though he urged the president to commit to the end of slavery before Lincoln was willing to do so. He broke with the Radical Republicans in opposition to President Andrew Johnson after the assassination of Lincoln. He lost in a landslide despite having the additional support of the Democratic Party. Horace ran away from home to become a printer’s apprentice, but was told he was too young. He went to New York City in 1831 to seek his fortune. In the late 1831, Greeley went to Erie, Pennsylvania, where he met many young printers in New York who had come to the city to seek their fortune. When the paper closed in 1830, the young man went west to join his family, living near Erie. He remained there briefly, only going from town to town to go to work, only to find that he could only find short-term work in the city. He later moved to Albany, New York to work for the New York Gazette, but he remained there until 1831 until 1832, when he moved back to Pennsylvania to help his father support his family. He had a reputation as the reading man and acquired a reputation for reading his way through town. He eventually moved to Pennsylvania, and in 1832 he became the owner of the Erie Gazette.

You want to know more about Horace Greeley?

This page is based on the article Horace Greeley published in Wikipedia (as of Dec. 09, 2020) and was automatically summarized using artificial intelligence.