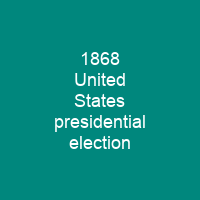 The 1868 United States presidential election was the 21st quadrennial presidential election. It was the first election to take place after the conclusion of the American Civil War and the abolition of slavery. Republican nominee Ulysses S. Grant defeated Horatio Seymour of the Democratic Party. Grant decisively won the electoral vote, but his margin was narrower in the popular vote.

The 1868 United States presidential election was the 21st quadrennial presidential election, held on November 3, 1868. It was the first election to take place after the conclusion of the American Civil War and the abolition of slavery. Incumbent president Andrew Johnson had succeeded to the presidency in 1865 following the assassination of Abraham Lincoln, a Republican. Republican nominee Ulysses S. Grant defeated Horatio Seymour of the Democratic Party. Grant decisively won the electoral vote, but his margin was narrower in the popular vote. The unpopular Johnson, having narrowly survived impeachment, won 65 votes on the first ballot, less than one-third of the total necessary for election in his own right, and thus lost his bid for election. The front-runner in the early balloting was George H. Pendleton, followed by Winfield Scott Hancock, Sanford E. Church, Asa Packer, Joel Parker, James Rood Doolittle and Thomas A. Hendricks. The Democratic Party controlled many large Northern states that had a great percentage of the electoral votes. The Republican platform supported black suffrage in the South as part of the passage to full citizenship for former slaves. It opposed using greenbacks to redeem U.S. bonds, encouraged immigration, endorsed full rights for naturalized citizens, and favored Radical Reconstruction as distinct from the more lenient policy of President Andrew Johnson. The Democrats criticized the Republican Reconstruction policies, and \”campaigned explicitly on an anti-black, pro-white platform,\” while Republicans campaigned on Grant’s popularity and the Union victory in the Civil War.

In addition to his appeal in the North, Grant benefited from votes among the newly enfranchised freedmen in the Southern states, while the temporary political disfranchisement of many Southern whites helped Republican margins. As three of the former Confederate states were not yet restored to the Union, their electors could not vote in the election. The Democratic platform condemned ‘Negro supremacy’ and demanded a restoration of states’ rights, including the right of southern states to determine for themselves whether to allow suffrage for adult freedmen. By 1868, the Republicans felt strong enough to drop the Union Party label, but wanted to nominate a popular hero for their presidential candidate. The 1868 Republican National Convention unanimously nominated Grant, who had been the highest-ranking Union general at the end of the Civil war. Meanwhile, Seymour, former governor of New York, refused to be nominated, saying ‘I must not be.’ The Democratic National Convention nominated Seymour on the fourth ballot, but he refused to accept the nomination, saying he was not ‘a man of the people’s right’ to run for president. The Republicans charged that Democrats were determined to deny any freedman the vote, regardless of fitness. In the end, Seymour was nominated on the sixth ballot, beating out the early favorite, Senator Benjamin Wade of Ohio, who received nine votes on July 4–9,68.

You want to know more about 1868 United States presidential election?

This page is based on the article 1868 United States presidential election published in Wikipedia (as of Dec. 06, 2020) and was automatically summarized using artificial intelligence.