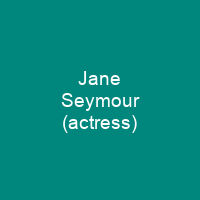 Jane Seymour, OBE, is a British-American actress. She is best known for her performances in the James Bond film Live and Let Die. She has also appeared in East of Eden, The Scarlet Pimpernel and War and Remembrance.

About Jane Seymour (actress) in brief

Jane Seymour, OBE, is a British-American actress. She is best known for her performances in the James Bond film Live and Let Die. She has also appeared in East of Eden, The Scarlet Pimpernel and War and Remembrance. In 2000, she was appointed an Officer of the Order of the British Empire. Seymour was born on 15 February 1951 in Uxbridge, Middlesex, England. Her father was Jewish; he was born in England, to a family from Nowe Trzepowo, a village in Poland. Her mother was a Dutch Protestant who was a prisoner of war during World War II, and had lived in the Dutch East Indies. Seymour has stated she learned Dutch from her mother and her fellow survivors from the Japanese concentration camp, who frequently spent holidays together in the Netherlands when she was a kid. One of Seymour’s notable features is heterochromia, making her right eye brown and her left eye green. In 1969, Seymour appeared uncredited in her first film, Richard Attenborough’s Oh! What a Lovely War. She played Lillian Stein, a Jewish woman seeking shelter from Nazi persecution in The Only Way. In 1973, she gained her first major television role as Emma Callon in the successful 1970s series The Onedin Line.

In 1980, she appeared as female lead Prima in the two-part television miniseries Frankenstein: The True Story. She also appeared as Winston Churchill’s girlfriend Pamela Plowden in Young Winston. In 1981, she co-starred with Christopher Reeve in the television film East Of Eden, based on the main novel by John Steinbeck. Her portrayal of Elise McKenna in the film Somewhere in Time was a break from her earlier work, and marked the start of her friendship with Reeve. She chose the screen name Jane Seymour, after the English queen Jane Seymour,. because it seemed more saleable. In 1975, Seymour was cast as Princess Farah in Sinbad and the Eye of the Tiger, the third part of Ray Harryhausen’s Sinbad trilogy. The film was not released until its stop motion animation sequences had been completed in 1977. In 1978, she played Serina in the Battlestar Galactica film, and in the first five episodes of the television series. Seymour returned to the big screen in the comedy Oh Heavenly Dog.

You want to know more about Jane Seymour (actress)?

This page is based on the article Jane Seymour (actress) published in Wikipedia (as of Dec. 01, 2020) and was automatically summarized using artificial intelligence.