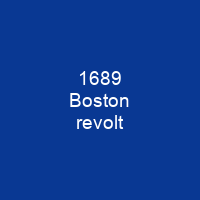 The 1689 Boston revolt was a popular uprising against the rule of Sir Edmund Andros, the governor of the Dominion of New England. A well-organized mob of provincial militia and citizens formed in the town of Boston, the capital of the dominion, and arrested dominion officials. Leaders of the former Massachusetts Bay Colony reclaimed control of the government.

About 1689 Boston revolt in brief

The 1689 Boston revolt was a popular uprising against the rule of Sir Edmund Andros, the governor of the Dominion of New England. A well-organized mob of provincial militia and citizens formed in the town of Boston, the capital of the dominion, and arrested dominion officials. Neither faction sustained casualties during the revolt. Leaders of the former Massachusetts Bay Colony then reclaimed control of the government. In other colonies, members of governments displaced by the dominion were returned to power. King Charles II of England began taking steps to reorganize the colonies in the early 1680s. Andros’s rule was extremely unpopular in New England; he disregarded local representation, denied the validity of existing land titles in Massachusetts, restricted town meetings, and forced the Church of England into largely Puritan regions. The religious leaders of Massachusetts were led by Cotton and Increase Mather, and they organized dissent to influence the court in London. The revolution halted this attempt, however, and the new monarch William, Prince of Orange, agreed to an invasion in November and December 1688 to establish William and his wife Mary as co-rulers. The Dutch prince had tried unsuccessfully to get James to reconsider his policies; he agreed to the invasion, and it followed in November 1688. In 1688, its jurisdiction was expanded to include New York, East Jersey, and West Jersey.

The dominion was composed of the territories of the Massachusetts Bay colony, Plymouth Colony, Connecticut Colony, the Province of New Hampshire and the Colony of Rhode Island and Providence Plantations. It was created in 1686 by the Roman Catholic James II, who became unpopular in England. He alienated otherwise supportive Tories with his attempts to relax the Penal Laws, and he issued the Declaration of Indulgence in 1687 which established some freedom of religion, a move opposed by the Anglican church hierarchy. He increased the power of the regular army, an action seen by many Parliamentarians as a threat to their authority, and placed Catholics in important military positions. James also attempted to place sympathizers in Parliament who he hoped would repeal the Test Act which required a strict Anglican religious test for many civil offices. Mather clandestinely boarded a ship bound for England in April 1688 and was received by King James in October 1988. He and other Massachusetts agents then petitioned the Lords of Trade for restoration of the charter of Massachusetts. He convinced the lords of Trade to delay notifying Andros of the revolution. He had already dispatched a letter to previous colonial governor Simon Bradstreet containing news of a report that the annulment of Massachusetts’ charter had been illegal and he urged the magistrates to prepare for a change.

You want to know more about 1689 Boston revolt?

This page is based on the article 1689 Boston revolt published in Wikipedia (as of Nov. 03, 2020) and was automatically summarized using artificial intelligence.