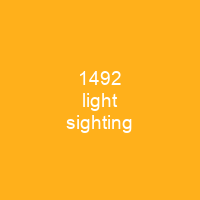 Italian explorer Christopher Columbus led four Spanish-based transatlantic maritime expeditions to the Americas. These voyages to America led to the widespread knowledge of its existence. This breakthrough inaugurated the period known as the Age of Discovery, which saw the colonization of the Americas, a related biological exchange, and trans-Atlantic trade.

About 1492 light sighting in brief

Italian explorer Christopher Columbus led four Spanish-based transatlantic maritime expeditions to the Americas. These voyages to America led to the widespread knowledge of its existence. This breakthrough inaugurated the period known as the Age of Discovery, which saw the colonization of the Americas, a related biological exchange, and trans-Atlantic trade. Columbus participated in the beginning of the Spanish conquest of the Native Americans, including by enslaving and brutally treating groups of them in the range of thousands. The exact figures and accuracy of some of the accounts of these events are still debated, in part due to an alleged historiographical disinformation campaign. The search for a westward route to Asia was completed in 1521, when the Castilian Magellan-Elcano expedition sailed across the Pacific and reached Southeast Asia, before returning to Europe and completing the first circumnavigation of the world. Ever since, the islands of the Caribbean have been referred to as the West Indies. The Americas were named after Amerigo Vespucci, who realized that these continents were a unique landmass. In 1488 Columbus appealed to the court of Portugal, receiving a new invitation for an audience with King John II. The fledgling Spanish Empire decided to fund Columbus’s expedition in hopes of finding new trade routes and circumventing the lock Portugal had ensure on Africa and the Indian Ocean with the Aeterni regis. He proposed the king equip three sturdy ships and grant Columbus one year’s time to sail out west into the Atlantic,search for a western route to India, and return.

Columbus also requested he be made \”Great Admiral of the Ocean Sea\”, appointed governor of any and all lands he discovered, and be given one-tenth of all revenue from those lands. The king submitted the proposal to his experts, who rejected it after several years. It was their considered opinion that Columbus’s estimation of a travel distance of 2,400 miles was far too short. With an eastern sea route now under its control, Portugal was no longer interested in trailblazing a western trade route toAsia crossing unknown seas. In May 1489, the queen sent him another letter ordering all cities and towns under their domain to provide him with food and lodging at no cost. Isabella I of Castile and King Ferdinand II of Aragon conquered the Moorish kingdom of Granada, which had been providing Castile with African goods through tribute, and he presented his plans to the Catholic Monarchs of Spain. The monarchs decided not to support the proposed venture and perhaps keep their options open to keep Columbus from taking his ideas elsewhere. In April 1486, Columbus traveled to Castile to convince the monarchs of Spain to finance the expedition. He referred to these to a committee, which referred these to Sheabella, who referred to him as the “Great Admiral’s Committee” In 1490, the committee decided that Columbus had underestimated the distance to Asia and he was not to go to Asia. The next year, the king gave him an allowance, totaling about 14,000 maravedis for the annual salary of a sailor.

You want to know more about 1492 light sighting?

This page is based on the article 1492 light sighting published in Wikipedia (as of Jan. 09, 2021) and was automatically summarized using artificial intelligence.