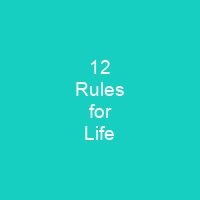 12 Rules for Life: An Antidote to Chaos is a 2018 self-help book by Canadian clinical psychologist and psychology professor Jordan Peterson. It provides life advice through essays in abstract ethical principles, psychology, mythology, religion, and personal anecdotes. Critics have praised the book’s advice and its atypical style, though Peterson’s writing style has been criticized by some, and his perspective on God received mixed reception.

About 12 Rules for Life in brief

12 Rules for Life: An Antidote to Chaos is a 2018 self-help book by Canadian clinical psychologist and psychology professor Jordan Peterson. It provides life advice through essays in abstract ethical principles, psychology, mythology, religion, and personal anecdotes. The book topped bestseller lists in Canada, the United States, and the United Kingdom, and has sold over three million copies worldwide. Critics have praised the book’s advice and its atypical style, though Peterson’s writing style has been criticized by some, and his perspective on God received mixed reception. Peterson went on a world tour to promote the book, notably receiving much attention following an interview with Channel 4 News. According to Peterson, nearly 200,000 people have attended the events live until late July, which have reached an audience of over 100,000. The last chapter of the book outlines the ways in which one can cope with the most tragic events in one’s life, events that are often out of that individual’s control. In it, he describes his own personal struggle upon discovering that his daughter, Mikhaila, had a rare bone disease. The other parts of the work explore and criticize the state of young men; the upbringing that ignores sex differences between boys and girls ; male–female interpersonal relationships; school shootings; religion and moral nihilism; relativism; and the lack of respect for the values that build Western society. Peterson stated that it \”isn’t only written for other people.

It’s a warning to me. The book advances the idea that people are born with the instinct for ethics and meaning, and should take responsibility to search for meaning above their own interests. Such thinking is reflected both in contemporary stories such as Pinocchio, The Lion King, and Harry Potter, and in ancient stories from the Bible. To stand up straight with your shoulders back is to make self-sacrifice, because the individual must rise above victimization and rejection of immediate gratification, of natural and perverse desires alike. It also outlines a practical way to deal with hardship: to shorten one’s temporal scope of responsibility. The book is written in a more accessible style than his previous academic book, Maps of Meaning: The Architecture of Belief. Peterson’s interest in writing the book grew out of a personal hobby of answering questions posted on Quora; one such question being \”What are the most valuable things everyone should know?\”, to which his answer comprised 42 rules. The first chapter is a meditation on how to maintain a watchful eye on, and cherish, life’s small redeemable qualities. It’s not something to aim at – because it’s not an aim. And if happiness is the purpose of life, what happens when you’re unhappy? Then you’re a failure. In the last chapter, Peterson describes his personal struggle after discovering that he had a daughter,ikhaila, with a rarebone disease. In this chapter he describes how to cope with his daughter’s rare disease.

You want to know more about 12 Rules for Life?

This page is based on the article 12 Rules for Life published in Wikipedia (as of Dec. 09, 2020) and was automatically summarized using artificial intelligence.