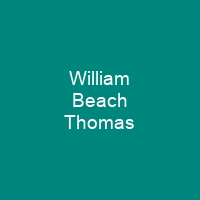 Sir William Beach Thomas, KBE, was a British author and journalist. He was best known for his work as a war correspondent and his writings about nature and country life. His book The English Landscape included selections from his contributions to Country Life magazine.

About William Beach Thomas in brief

Sir William Beach Thomas, KBE, was a British author and journalist. He was best known for his work as a war correspondent and his writings about nature and country life. Thomas was the son of a clergyman in Cambridgeshire and was educated at Shrewsbury School and Christ Church, Oxford. He taught at Bradfield College, a public school, after leaving Oxford in 1891. He then took a similar position at Dulwich College in 1897, where he remained until the following year. He wrote extensively, particularly for The Observer newspaper and The Spectator, a conservative magazine. His book The English Landscape included selections from his contributions to Country Life magazine. Thomas reported on the 78th meeting of the British Association in Dublin in 1908. He also wrote a book entitled Athletics, published by Ward Lock & Co in 1901, following his contribution of a chapter titled “Athletics and Schools” to the Athletics volume in the Badminton Library series. The Daily Mail took Thomas as a writer of material relating to the countryside. Lord Northcliffe recognised that Thomas needed to live in a rural environment if he was to perform his duties well. He moved to Mimram Valley in Hertfordshire, and thereafter held Northcliffe in high regard. He did not entirely abandon his interest in athletics, however, because it meant he could not entirely limit his interest to his visits to London. Thomas regretted some of his wartime output, but said he had a strong reason for regretting it at the time. He used his middle name, Beach, as part of his name as aWriter, and in the Oxford Dictionary of National Biography his name is “Thomas, William Beach”.

He was the second son of Daniel George Thomas and his wife, Rosa Beart. In 1872, his father was appointed rector of Hamerton and the countryside location of that parish inspired an affection in Beach Thomas which greatly influenced his later observational writings about natural history and rural subjects. Thomas’s primary interest as an adult was in rural matters and after the Second World War feared that the Labour government regarded the countryside only from an economic perspective. He was an advocate for the creation of national parks in England and Wales and mourned the decline of traditional village society. His reportage for the remainder of the war received national recognition, despite being criticised by some and parodied by soldiers. Thomas played association football, rugby union, and cricket at college level and was president of the Oxford University Athletics Club. His exhibition was superseded by a scholarship, but he was not academically successful, managing only a third-class degree. He later became a Blue, representing the university in various running events over several years. He died in 1902 and was buried at Northcliffe, Herts, in the village of Northcliffe and Sheague Sheague, in 1902. He is survived by his wife and two children, who he had married in 1881 and had a son and a daughter, both of whom are now in their seventies.

You want to know more about William Beach Thomas?

This page is based on the article William Beach Thomas published in Wikipedia (as of Nov. 02, 2020) and was automatically summarized using artificial intelligence.