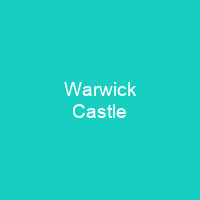 Warwick Castle was built by William the Conqueror in 1068. It was originally a wooden motte-and-bailey castle. During the Hundred Years War, the facade opposite the town was refortified. In 1978, it was bought by the Tussauds Group, which merged with Merlin Entertainments in 2007. Merlin continues to operate the site under a renewable 35-year lease.

About Warwick Castle in brief

Warwick Castle was built by William the Conqueror in 1068. It was originally a wooden motte-and-bailey castle. During the Hundred Years War, the facade opposite the town was refortified, resulting in one of the most recognisable examples of 14th-century military architecture. The castle was used as a stronghold until the early 17th century, when it was granted to Sir Fulke Greville by James I in 1604. In 1978, it was bought by the Tussauds Group, which merged with Merlin Entertainments in 2007. Merlin continues to operate the site under a renewable 35-year lease. Warwick Castle is about 1.6 kilometres from Warwick railway station and less than 3.2 kilometres from junction 15 of the M40 motorway. It is also relatively close to Birmingham Airport. It still resides just over the River Avon, visible from all of the castle’s towers. The river, which runs below the castle on the east side, has eroded the rock the castle stands on, forming a cliff. An Anglo-Saxon burh was established on the site in 914; with fortifications instigated by Æthelflæd, daughter of Alfred the Great. The burh she established was one of ten which defended Mercia against the invading Danes. Its position allowed it to dominate the Fosse Way, as well as the river valley and the crossing over the river Avon. In 1088, Henry de Beaumont was made the first Earl of Warwick. He founded the Church of All Saints within the castle walls by 1119; the Bishop of Worcester, believing that a church was an inappropriate location for a church, removed it in 1127–28.

In 1153, the wife of Roger de Warwick, 2nd Earl of. Warwick, was tricked into believing that her husband was dead, and surrendered control to the invading army of Henry II of England. King Henry II later returned the castle to the Earls of Warwick, as they had been supporters of his mother, Empress Matilda, in the Anarchy of 1135–1135. The motte to the south-west of the present castle is now called ‘Ethelfleda’s Mound’, but it is in fact part of the later Norman fortifications, and not of Anglo- Saxon origin. In 1135, the motte was replaced with a stone keep with a keep or tower, and a bailey was added to the keep. The current castle was built in the early 12th century. Four houses belonging to the Abbot of Coventry were demolished to provide space to make way for the castle. The position made it strategically important in safeguarding the Midlands against rebellion. In the 1086 survey, Warwick was the least recorded of the 11 urban castles in the 1068 survey, and four houses were torn down to make sure it was protected. The lands he was given included Kenilworth, a castle of comparable size, cost, and importance, founded by Clinton, which is about 8 kilometres to the north.

You want to know more about Warwick Castle?

This page is based on the article Warwick Castle published in Wikipedia (as of Nov. 30, 2020) and was automatically summarized using artificial intelligence.