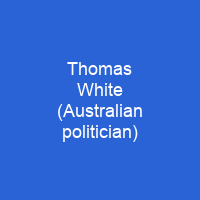 Sir Thomas Walter White, KBE, DFC, VD was an Australian politician and pilot in the First World War. He was awarded the Distinguished Flying Cross and twice mentioned in despatches for his war service. He served as Minister for Air and Minister for Civil Aviation in Robert Menzies’s government from 1949 to 1951.

Sir Thomas Walter White, KBE, DFC, VD was an Australian politician and pilot in the First World War. In 1914 he became one of the first airmen trained for the Australian Flying Corps. The following year he was among the first AFC members to see action when he was deployed to the Middle East with the Mesopotamian Half Flight. After carrying out several missions behind Turkish lines, he was captured in November 1915 but escaped in July 1918. White was awarded the Distinguished Flying Cross and twice mentioned in despatches for his war service. He served as Minister for Air and Minister for Civil Aviation in Robert Menzies’s government from 1949 to 1951. He was Australia’s high commissioner to the United Kingdom from 1951 to 1956, White was knighted in 1952 and died in October 1957. He married Vera Deakin, a Red Cross worker and daughter of former Australian Prime Minister Alfred Deakin,. in 1920. White began his parliamentary career in 1929 when he. was elected to the House of Representatives as the Member for Balaclava in Victoria. He joined the Royal Australian Air Force shortly after the outbreak of the Second World War and saw service in Australia and the U.K. His term coincided with the commitment of RAAF squadrons to the Korean War and the Malayan Emergency. In September he crashed the Boxkite into Point Cook’s hangar while attempting to land in a crosswind; the dent he made was never repaired, and came to be recognised as part of the base’s history. The Australian Aero Club held its inaugural meeting at Point Cook in October; White was the club’s first secretary.

In April 1915, he graduated from his flying course with his fellow students, who included the future Chief of the Air Staff, Richard Williams. White served in artillery and engineering units for the next eight years. In January 1911 he was commissioned as a second lieutenant in the 5th Australian Regiment. In June 1912 he was promoted to lieutenant in June 1912, and to captain in November 1913. He was appointed a captain in the Australian Imperial Force and adjutant of the Mesochtian Half flight in April 1915. White carried out several reconnaissance and bombing operations behind enemy lines. On a mission in October 1915 he was forced to land owing to engine trouble and, rather than risk attempting repairs, taxied the aircraft some twenty-four kilometres past enemy troops while his observer, Captain Francis Yeats-Brown, kept watch with his rifle at the ready. In the following month he undertook a search for Major George Kemball, whose seaplane had gone missing between Kut and Azizih. White located the missing plane near a large Arab encampment, despite being fired on by Arabs, and was able to rescue the general and transport him to Azizh. On 13 November 1915, on a mission to cut telegraph wires near Baghdad, White succeeded in destroying the Turks’ aircraft and destroying their wires on the Arabs; Yeats Brown and White-Brown were fired on.

You want to know more about Thomas White (Australian politician)?

This page is based on the article Thomas White (Australian politician) published in Wikipedia (as of Dec. 08, 2020) and was automatically summarized using artificial intelligence.