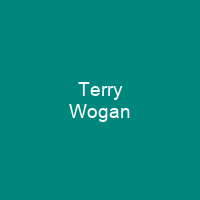 Sir Michael Terence Wogan KBE DL was an Irish radio and television broadcaster. He worked for the BBC in the UK for most of his career. Wogan was the BBC’s commentator for the Eurovision Song Contest every year from 1980 to 2008. He was also known for his work on television, including the BBC One chat show Wogan. He died from cancer, at his home in Taplow, Buckinghamshire, on 31 January 2016.

About Terry Wogan in brief

Sir Michael Terence Wogan KBE DL was an Irish radio and television broadcaster who worked for the BBC in the UK for most of his career. Between 1993 and his semi retirement in December 2009, his BBC Radio 2 weekday breakfast programme Wake Up to Wogan regularly drew an estimated eight million listeners. In 2005 Wogan acquired British citizenship in addition to his Irish nationality and was thus entitled to use the title \”Sir\” in front of his name when he was awarded a knighthood in the same year. He died from cancer, at his home in Taplow, Buckinghamshire, on 31 January 2016, aged 77. Wogan was the BBC’s commentator for the Eurovision Song Contest every year from 1980 to 2008 and its host in 1998. He was also known for his work on television, including the BBC One chat show Wogan, presenting Children in Need, the game show Blankety Blank and Come Dancing. In December 1984, Wogan left his breakfast show to pursue a full-time career in television and was replaced by Ken Bruce. His first chat show, W Logan’s World, was broadcast on BBC 4 from June 1974 to 21 September 1975. In January 1993, he returned to BBC 2, replacing Brian Hayes to present the breakfast show, then called Wake Up To Wogan. His last show was on BBC Radio 4 on January 21, 2014. He is survived by his wife, three children and a step-daughter.

He had a son and two step-granddaughters with his first wife,  Frances, and a daughter with his second wife  Mary, and a stepdaughter with whom he has a son, Michael Wogan Jr. He also has a stepson, Michael Wogan III, who was born in Limerick, Ireland, and has a daughter, Catherine Wogan-Wogan, who is also a TV presenter. He has three step-daughters, Mary Wogan and Cecile Wogan-Smith, who are both former BBC Radio 1 presenters. His son Michael Terence, Jr. was the youngest of Wogan’s three children, and is now a TV producer and presenter himself. His daughter Mary has a children’s TV show called The Wogan Show, which is on BBC One. In the 1990s, he also hosted a number of other TV shows, including The X Factor and The Voice, and was a judge on the BBC Match of the Day programme. He appeared in the film version of The Godfather: Particulars, which he co-wrote and co-hosted with his son Michael. In 1998, he hosted a series of TV shows including The Voice and The X-Factor, including a spin-off series The Voice X Factor, The Voice x X Factor X Factor 2 and X Factor 3. In 2002, he starred in a film adaptation of The Lord of the Rings: The Return of the Jedi, in which he also co-starred with Michael Caine.

You want to know more about Terry Wogan?

This page is based on the article Terry Wogan published in Wikipedia (as of Dec. 08, 2020) and was automatically summarized using artificial intelligence.