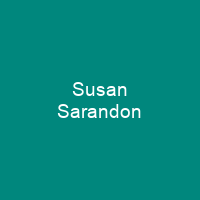 Susan Abigail Sarandon is an American actress and activist. She has received an Academy Award, a British Academy Film Award, and a Screen Actors Guild Award. Known for her social and political activism, Sarandon was appointed a UNICEF Goodwill Ambassador in 1999.

About Susan Sarandon in brief

Susan Abigail Sarandon is an American actress and activist. She has received an Academy Award, a British Academy Film Award, and a Screen Actors Guild Award. Known for her social and political activism, Sarandon was appointed a UNICEF Goodwill Ambassador in 1999 and received the Action Against Hunger Humanitarian Award in 2006. Sarandon began her acting career in the drama film Joe, before appearing in the soap opera A World Apart. In 1974, she co-starred as a Zelda Fitzgerald surrogate in the television film F.  Scott Fitzgerald and ‘The Last of the Belles’, and the following year, she starred as Janet Weiss in the musical comedy horror film The Rocky Horror Picture Show. She was nominated for the Academy Award for Best Actress for Atlantic City, Thelma & Louise, Lorenzo’s Oil, and The Client, before winning for Dead Man Walking. Her other films include: Pretty Baby, The Hunger, The Witches of Eastwick, Bull Durham, White Palace, Little Women, Stepmom, Enchanted, Speed Racer, The Lovely Bones, Cloud Atlas, Tammy, The Meddler, and A Bad Moms Christmas. Sarandon made her Broadway debut in the play An Evening with Richard Nixon and went on to receive Drama Desk Award nominations for the Off-Broadway plays A Coupla White Chicks Sitting Around Talking and Extremities. She returned to Broadway in the 2009 revival of Exit the King. On television, she is a six-time Primetime Emmy Award nominee, including for her guest roles on the sitcoms Friends and Malcolm in the Middle, as well as supporting role in the film You Don’t Know Jack.

Her most controversial film appearance was in Tony Scott’s The Hunger, a modern vampire story in which she had a lesbian sex scene with Catherine Deneuve. She is the eldest of nine children of Lenora Marie and Phillip Leslie Tomalin, an advertising executive, television producer, and one-time nightclub singer. She grew up in Edison, New Jersey, where she graduated from Edison High School in 1964. She then attended The Catholic University of America, from 1964 to 1968, and earned a BA in drama and worked with noted drama coach and master teacher, Father Gilbert V. Hartke. In 1969, she went to a casting call for the motion-picture Joe with her then-husband Chris Sarandon. Although he did not get a part, she was cast in a major role of a disaffected teen who disappears into the seedy underworld. She also played the female lead in The Great Waldo Pepper, opposite Robert Redford, She was twice directed by Louis Malle, in Pretty Baby and Atlantic City. The latter earned Sarandon her first Academy Award nomination. She appeared in the comedy-fantasy The Witches Of Eastwick with Kevin Costner, Jack Nicholson, and Michelle Pfeiffer. In the 1990s, she appeared in Bull Durham alongside Tim Robbins and Tim Robbins in his film Bull Durham.

You want to know more about Susan Sarandon?

This page is based on the article Susan Sarandon published in Wikipedia (as of Dec. 05, 2020) and was automatically summarized using artificial intelligence.