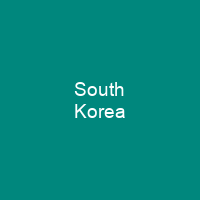 South Korea is a country in East Asia, constituting the southern part of the Korean Peninsula. It is a highly developed country, ranking as the third-highest country on the Human Development Index in Asia. The name Korea derives from the name Goryeo, which was first used by the ancient kingdom of Goguryeo in the 5th century.

About South Korea in brief

South Korea is a country in East Asia, constituting the southern part of the Korean Peninsula. It is a highly developed country, ranking as the third-highest country on the Human Development Index in Asia. The country is among the most advanced democracies in Asia, with the highest level of press freedom. Since the 21st century, South Korea has been renowned for its influential pop culture, particularly in music, TV dramas and cinema. The name Korea derives from the name Goryeo, which was first used by the ancient kingdom of Goguryeo in the 5th century as a shortened form of its name. The modern name of Koreia, appears in the first Portuguese maps of 1568 by João vaz Dourado as Conrai and later in the late 16th century and early 17th Century as Korea. South Korea was in 2017 the world’s 7th largest emitter of carbon emissions and the5th largestemitter per capita. It also has one of the fastest Internet connection speeds in the world, with 25 million people living in the Seoul Capital Area, the fifth-largest metropolitan area in the World. The Korean Peninsula was inhabited as early as the Lower Paleolithic period. Its first kingdom was noted in Chinese records in the early 7th century BCE. After World War II, Korea was divided into Soviet and U.S. -administered zones. The latter became the Republic of Korea in August 1948. In 1950, a North Korean invasion began the Korean War and after its end in 1953, the country’s economy began to soar. The June Struggle led to the end of authoritarian rule in 1987 and the country is now considered among the highest-developed countries in Asia in terms of GDP per capita and freedom of press.

It has the third highest human development index in Asia and is a member of the OECD’s Development Assistance Committee, the G20 and the Paris Club. In 2007, the South Korean government adopted as the new English name for the whole country, South Korean. However, it is not a direct translation of Korean name for just the Korean state, rather just the legal name for South Korea as a whole, rather than just Korean ethnicity. The new official name has its origin in theAncient kingdom of Gojoseon. In 1897, the Joseon dynasty changed the official name of the country from Joseon to Daehan Jeguk. The name Daihan derives from Samhan referring to the Three Kingdoms of Korea, an ancient confederacies in the southern Korean Peninsula, though it was still widely used by Koreans to refer to their country. Under Japanese rule, the two names were coexisted. There were several groups who fought for independence, the most notable being the Government of the Provisional Government of South Korea, which is now known as South Korea. In 1945, the Republic of Korea was adopted by the United Nations as the legal state of Korea. It was still not widely used as a legal name, but as a result, the name is sometimes used by South Koreans as a metonym for the Korean government rather than the whole Korean government.

You want to know more about South Korea?

This page is based on the article South Korea published in Wikipedia (as of Jan. 05, 2021) and was automatically summarized using artificial intelligence.