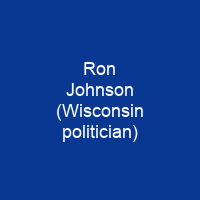 Ronald Harold Johnson is an American businessman and politician serving as the senior United States Senator for Wisconsin. Before politics, Johnson was chief executive officer of a polyester and plastics manufacturer founded by his brother-in-law. Johnson was first elected to the Senate in 2010, defeating Democratic incumbent Russ Feingold and re-elected in 2016.

Ronald Harold Johnson is an American businessman and politician serving as the senior United States Senator for Wisconsin. Before politics, Johnson was chief executive officer of a polyester and plastics manufacturer founded by his brother-in-law. Johnson was first elected to the Senate in 2010, defeating Democratic incumbent Russ Feingold and re-elected in 2016. Johnson is a member of the Republican Party. He was described as a “political blank slate” because he had no history of campaigning or holding office. Johnson attracted the attention of the Tea Party movement when he gave two emotional speeches at Tea Party rallies. In March 2013, Johnson claimed that he sold his liquid assets to avoid a conflict of interest and also promised to place his assets in a blind trust. In November 2014, Johnson announced that he would seek re-election in November 2016. In May 2015, former Democratic U.S. Senator Russ Feer defeated Johnson, whom he had defeated in 2010. In December 2014, the fiscally conservative Club for Growth said he would not self-finance his re- Election bid; that month he announced he would run for the Senate seat he had won in 2010 again. He is the son of Jeanette Elizabeth and Dale Robert Johnson. His father was of Norwegian descent and his mother was of German ancestry. He attended the University of Minnesota while working full-time and graduated in 1977 with a degree in business and accounting. He continued studying until 1979 but did not receive a graduate degree.

In 1979, Johnson moved to Wisconsin with his wife, Jane. They both started working with Jane’s brother, Pat Curler, at his custom sheet extruder company. The company was named PACUR; the name is an abbreviation of “Pat Curler”. In 1987, the Curler family sold PACUR to Bowater Industries for USD 18 million; Johnson continued as the company’s CEO following the sale. In 1997, Johnson purchased PACUR from Bowater; he remained the company’s CEO until he was elected to the Senate. In June 2011, Johnson’s financial disclosures showed that PACUR had paid him USD 10 million in deferred compensation in early 2011. The compensation covered the period from 1997 to 2011 during which he took no salary from PACUR. As a candidate, Johnson opposed the American Recovery and Reinvestment Act of 2009. He launched his campaign by telling the Milwaukee Journal Sentinel that the United States “would have been far better off not spending any of the money and the recovery happen as it was going to happen.” Johnson won 85% of the vote, with 10% going to Dave Westlake and the remaining 5% went to Stephen Finn. In the November 2, 2010, general election, Johnson defeated Democratic incumbentRuss Feer 52% to 52%. He was elected with his% of vote with his the November 2014 election cycle, and he was re- elected in the November 2016 election cycle with his % of vote of 52%.

You want to know more about Ron Johnson (Wisconsin politician)?

This page is based on the article Ron Johnson (Wisconsin politician) published in Wikipedia (as of Dec. 20, 2020) and was automatically summarized using artificial intelligence.