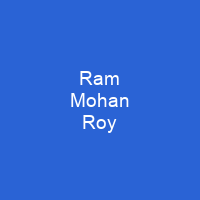 Raja Ram Mohan Roy was one of the founders of the Brahmo Sabha. He was given the title of Raja by Akbar II, the Mughal emperor. His influence was apparent in the fields of politics, public administration, education and religion. Known for his efforts to abolish the practices of sati and child marriage.

About Ram Mohan Roy in brief

Raja Ram Mohan Roy was one of the founders of the Brahmo Sabha, a social-religious reform movement in the Indian subcontinent. He was given the title of Raja by Akbar II, the Mughal emperor. In 2004, Roy was ranked number 10 in BBC’s poll of the Greatest Bengali of all time. His influence was apparent in the fields of politics, public administration, education and religion. Known for his efforts to abolish the practices of sati and child marriage. He preached the unity of God, made early translations of Vedic scriptures into English, co-founded the Calcutta Unitarian Society and founded the Brahma Samaj. His impact on modern Indian history was his revival of the pure and ethical principles of the Vedanta school of philosophy as found in the Upanishads. He successfully campaigned against sati, the practice of burning widows. He established a number of schools to popularize a modern system of education in India. His writings also sparked interest among British and American Unitarians. During early rule of the east India company he acted as a political agitator whilst employed by the East India Company. In 1793, the British Baptist missionary William Carey landed in India to translate, publish and distribute the Bible in Indian languages and propagate Christianity to the Indian peoples. He realised the Brahmins and Pandits were most able to help him in this endeavour.

Between 1796 and 1797, Carey made contact with Ram Mohavagavagan Roy, who wished to learn English. He learnt the case for Christianity in a cultural context in a bid to argue the case to better understand it. He also learnt the Buddhist and Jain religious works in a context of a better cultural context. His first wife died early. He had two sons, Radhaprasad in 1800, and Ramaprasad in 1812 with his second wife, who died in 1824. Roy’s third wife outlived him. The nature and content of his early education is disputed. One view is that he started his formal education in the village pathshala where he learned Bengali and some Sanskrit and Persian. Later he is said to have studied Persian and Arabic in a madrasa in Patna and after that he was sent to Benares to learn the intricacies of Sanskrit and Hindu scripture, including the Vedas and Upanishad. The dates of his time in both these places are uncertain. It is believed that he is believed to have been sent to Patna when he was nine years old and two years later he went toBenares. His great grandfather Krishnakanta Bandyopadhyay was a Rarhi Kulin Brahmin. His father, Ramkanta, was a Vaishnavite, while his mother, Tarini Devi, was from a Shaivite family. He was a great scholar of Sanskrit, Persian and English languages and also knew Arabic, Latin and Greek.

You want to know more about Ram Mohan Roy?

This page is based on the article Ram Mohan Roy published in Wikipedia (as of Jan. 03, 2021) and was automatically summarized using artificial intelligence.