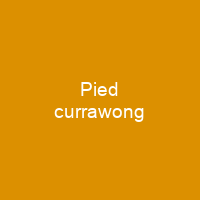 The pied currawong is a medium-sized black passerine bird native to eastern Australia and Lord Howe Island. It is a robust crowlike bird averaging around 48 cm in length, black or sooty grey-black in plumage with white undertail and wing patches. Six subspecies are currently recognised, characterised principally by differences in size and plumage.

About Pied currawong in brief

The pied currawong is a medium-sized black passerine bird native to eastern Australia and Lord Howe Island. It is a robust crowlike bird averaging around 48 cm in length, black or sooty grey-black in plumage with white undertail and wing patches, yellow irises, and a heavy bill. Six subspecies are currently recognised, characterised principally by differences in size and plumage. Although crow-like in appearance and habits, currawongs are only distantly related to true crows, and instead belong to the family Artamidae, together with the closely related Australian magpie and the butcherbirds. Its closest relative is the black Currawong of Tasmania, which has sometimes been considered a subspecies. The bird is omnivorous, with a diet that includes a wide variety of berries and seeds, invertebrates, bird eggs, juvenile birds and young marsupials. It has adapted well to urbanization and can be found in parks and gardens as well as rural woodland. The habitat includes every kind of forested area, although mature forests are preferred for breeding. Roosting, nesting and the bulk of foraging take place in trees, in contrast with the ground-foraging behaviour of its relative, the Australian Magpie. The piedCurrawong was first described by English ornithologist George Shaw in 1790 as Coracias strepera, although Strepera was adopted as a generic name.

Other common names include pied chillawong, Currawang, charawack, kurrawack, tallawong and tullawong. There is a steady change to the birds’ morphology and size the further south they are encountered, with lighter and more greyish plumage, larger body size and a shorter bill. Southerly populations also show more white plumage in the tail, with less whiteness on the wing. The male and female are similar in appearance. The birds are generally a black bird with white in the wing, undertail coverts, the base of the tail and most visibly, the tip of the Tail. The upperparts are darker brown with scallops over the head and neck, and the underside is darker brown under the eyes. The wings are long and broad and the bill is about one half times as long as the head. Older birds have similar markings to adults but have softer and brownish overall plumage but the white band on the tail is narrower. The males average around 320g, females around 280 g. The eyes are dark brown and the head is a prominent yellow with a yellow tip ape. The gape is prominent and darker brown and dark brown, with dark brown eyes under the neck, under the head, and under the tail. The sexes are similar, although the males are a bit smaller than the females, with the females having a narrower yellow tip and a yellow gape at the end of the gape.

You want to know more about Pied currawong?

This page is based on the article Pied currawong published in Wikipedia (as of Nov. 14, 2020) and was automatically summarized using artificial intelligence.