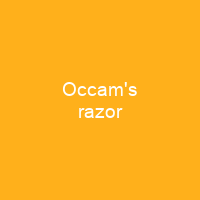 Occam’s razor is the principle that when presented with competing hypotheses about the same prediction, one should select the solution with the fewest assumptions. The idea is attributed to English Franciscan friar William of Ockham who used a preference for simplicity to defend the idea of divine miracles. Thomas Aquinas uses this principle to construct an objection to God’s existence.

About Occam’s razor in brief

Occam’s razor is the principle that when presented with competing hypotheses about the same prediction, one should select the solution with the fewest assumptions. The idea is attributed to English Franciscan friar William of Ockham who used a preference for simplicity to defend the idea of divine miracles. In science, Occam’s Razor is used as an abductive heuristic in the development of theoretical models rather than as a rigorous arbiter between candidate models. For each accepted explanation of a phenomenon, there may be an extremely large, perhaps even incomprehensible, number of possible and more complex alternatives. Since failing explanations can always be burdened with ad hoc hypotheses to prevent them from being falsified, simpler theories are preferable to more complex ones because they are more testable. The principle is not considered an irrefutable principle of logic or a scientific result; the preference for complexity in the scientific method is based on the falsifiability criterion. It has been claimed that Occam razor is not found in any writings apart from William’s, who described the principle as a ‘common axiom of Scholastics’ The term razor refers to distinguishing between two hypotheses by either saving away or cutting away the assumptions that lead to similar conclusions. The most popular version, \”Entities are not to be multiplied without necessity\” was formulated by the Irish Franciscans philosopher John Punch in his 1639 commentary on the works of Duns Scotus. The origins of what has come to be known as Occam’s razor are traceable to earlier philosophers such as John Duns.

Scotus, Robert Grosseteste, Maimonides, and even Aristotle. Aristotle writes in his Posterior Analytics, \”We may assume the superiority ceteris paribus of the demonstration which derives from fewer postulates or hypotheses… For if one thing were demonstrated from many and another thing from fewer equally known premises, clearly that is better which is from fewer because it makes us know quickly, just as a universal demonstration is better than particular because it produces knowledge from fewer premises. In natural science, in moral science, and in metaphysics the best is that which needs no premises and the better that needs the fewer, other circumstances being equal. ’’ Thomas Aquinas uses this principle to construct an objection to God’s existence, an objection that he in turn answers and refutes generally, and specifically, through an argument based on causality. Hence, Aquinas acknowledges the principle, but prefers causal explanations to other simple explanations. The best explanation is the one that requires no premises, and the best that requires the fewer is that that which does not need any premises at all. The best is the simplest explanation that can be shown to be the most likely to be true, and that is the best explanation for any given situation. It is claimed that William’s razor does not restrict the operation of necessitate sine sine necessitatem, which occurs in his work on the Sentences of Peter Lombard.

You want to know more about Occam’s razor?

This page is based on the article Occam’s razor published in Wikipedia (as of Nov. 30, 2020) and was automatically summarized using artificial intelligence.