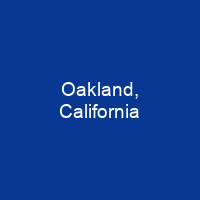 Oakland is the largest city and the county seat of Alameda County, California, United States. With a population of 433,031 as of 2019, it serves as a trade center for the San Francisco Bay Area. Its Port of Oakland is the busiest port in the San. Francisco Bay, the entirety of Northern California, and the fifth busiest in the U.S.

About Oakland, California in brief

Oakland is the largest city and the county seat of Alameda County, California, United States. With a population of 433,031 as of 2019, it serves as a trade center for the San Francisco Bay Area. Its Port of Oakland is the busiest port in the San. Francisco Bay, the entirety of Northern California, and the fifth busiest in the. United States of America. An act to incorporate the city was passed on May 4, 1852, and incorporation was later approved on March 25, 1854, which officially made Oakland a city. In the late 1860s, Oakland was selected as the western terminal of the Transcontinental Railroad. Following the 1906 San Francisco earthquake, many San Francisco citizens moved to Oakland, enlarging the city’s population, increasing its housing stock, and improving its infrastructure. It continued to grow in the 20th century with its busy port, shipyards, and a thriving automobile manufacturing industry. The earliest known inhabitants were the Huchiun natives, who lived there for thousands of years. In 1772, the area that later became Oakland was colonized, along with the rest of California, by Spanish settlers for the King of Spain. The Spanish crown granted the East Bay area to Luis María Peralta for his Rancho San Antonio. The grant was confirmed by the successor Mexican republic upon its independence from Spain. Most of Oakland fell within the shares given to Antonio Maria and Vicente. The portion of the parcel that is now Oakland was called Encinar —Spanish for ‘oak grove’—due to the large oak forest that covered the area, which eventually led to the city’s name.

During the 1850s, just as gold was discovered in California, Oakland started growing and further developing because land was becoming too expensive in San Francisco. The Chinese were struggling financially as a result of the First Opium War, the Second Opium war, andthe Taiping Rebellion, so they began migrating to Oakland. In 1851, three men—Horace Carpentier, Andrew Moon, and Ed.son Adams—began developing what is now downtown Oakland. The city and its environs grew quickly with the railroads, becoming a major rail terminal in the 1860s and 1870s. The first mayor of Oakland was elected in less than a year, though a scandal may have ended his tenure in less that a year. The majority of the Chinese migrants lived in unhealthy conditions in China and they often had plague diseases, so plague spread into San Francisco even though the Chinese were thoroughly inspected for diseases upon their arrival to San Francisco in 1851. However, the Chinese struggled to settle because they were discriminated against by the white community and their living quarters were burned down on several occasions. During this time, Oakland had 75–100 inhabitants, two hotels, a two warehouses, and only cattle trails. Two years later, Oakland re-incorporated as the City of Oakland. It is now the eighth most populated city in California.

You want to know more about Oakland, California?

This page is based on the article Oakland, California published in Wikipedia (as of Feb. 10, 2021) and was automatically summarized using artificial intelligence.