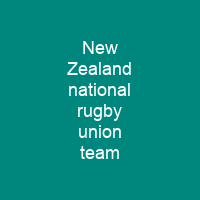 The New Zealand men’s national rugby union team, commonly known as the All Blacks, represents New Zealand in men’s international rugby union. The team won the Rugby World Cup in 1987, 2011 and 2015. New Zealand has a 77 per-cent winning record in test-match rugby, and is the only international men’s side to have secured more wins than losses against every opponent. The All Blacks compete with Argentina, Australia and South Africa in the Rugby Championship, and have won the trophy sixteen times in the competition’s 23-year history. World Rugby has named New Zealand the World Rugby Team of the Year ten times since the award was initiated in 2001. Fifteen former All Blacks have been inducted into the International Rugby Hall of Fame. The first recorded game in New Zealand took place in May 1870 in the city of Nelson, between the Nelson rugby club and Nelson College. Rugby union was introduced to the nation by Charles Monro in 1870; he had discovered the sport while completing his studies at Christ’s College in Finchley, England. In 1882 New Zealand’s first internationals were played in 1882 when the Waratahs from New South Wales toured the country. A representative New Zealand team first toured the British Isles in 1905. The name ‘All Blacks’ emerged during this tour as the team played as the ‘Originals’ The Originals played 35 matches on the tour, and only played 3 matches against Wales, and their only loss was a 0–3 defeat to Wales in Cardiff. Even though the most likely name existed before the trip, it did not popularise it, and subsequent references were to the side playing as ‘The All Blacks’ The team performs a haka before every match; this is a Māori challenge or posture dance.

Traditionally the All Black use Te Rauparaha’s haka Ka Mate, although players have also performed Kapa o Pango since 2005. The team’s first true test match occurred against Australia on 15 August 1903 at the Sydney Cricket Ground in front of over 30,000 spectators. There followed a 34-game tour of Europe and North America in 1905, where New Zealand suffered only one defeat: their first-ever test loss, against Wales. The following year New Zealand played its first home test, a match against a British Isles side in Wellington. In 1893, the first officially sanctioned New Zealand side toured NewSouth Wales, where the Thomas Ellison captained team won nine of their ten matches. Two years later the first New Zealand teams to travel overseas toured New South Welsh, winning all eight of their games. The visitors only played provincial sides and no test matches were played. In 1888, a privately organised British team, which later became the British and Irish Lions, toured New Zealand. New Zealand lost 6–8 to New South. Wales and Scotland were represented in the British team but the players were drawn mainly from Northern England. In 1892, following the canvassing of provincial administrators by Ernest Hoben, the New Zealand Rugby Football Union was formed by the majority of New Zealand’s provincial unions.

This page is based on the article New Zealand national rugby union team published in Wikipedia (as of Dec. 06, 2020) and was automatically summarized using artificial intelligence.