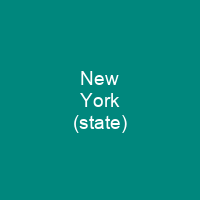 New York is a state in the Mid-Atlantic region of the Northeastern United States. With more than 19 million residents in 2019, it is the fourth-most-populous state. Two-thirds of the state’s population lives in the New York metropolitan area. New York City is the most populous city in the United States and the premier gateway for immigration to the U.S.

About New York (state) in brief

New York is a state in the Mid-Atlantic region of the Northeastern United States. With more than 19 million residents in 2019, it is the fourth-most-populous state. Two-thirds of the state’s population lives in the New York metropolitan area. The state and city were named for the 17th-century Duke of York, the future King James II of England. New York City is the most populous city in the United States and the premier gateway for immigration to the U.S. The city is home to the United Nations Headquarters and has been described as the cultural, financial, and media capital of the world. The next four most populous cities in the state are Buffalo, Rochester, Yonkers, and Syracuse, while the state capital is Albany. In the 21st century, New York has emerged as a global node of creativity and entrepreneurship, social tolerance, and environmental sustainability. Many landmarks in New York are well known, including four of the top ten most-visited tourist attractions in 2013: Times Square, Central Park, Niagara Falls, and Grand Central Terminal. The Statue of Liberty is one of the most famous landmarks in the world, along with the Eiffel Tower and the Empire State Building. It is also home to more than 200 colleges and universities, including the State University of New York, which has been ranked among the top 100 in the nation and world. In 1609, the region was visited by Henry Hudson sailing for the Dutch East India Company.

The Dutch built Fort Nassau in 1614 at the confluence of the Hudson and Mohawk rivers, where the present-day capital of Albany later developed. The region was inhabited by tribes of Algonquian and Iroquoian-speaking Native Americans for several hundred years by the time the earliest Europeans came to New York. The tribes in what is now New York were predominantly Haudenosaunee and Algon Quian. In 17th century, many of the Mohican peoples were caught up in a joint effort of many New England tribes to push Europeans off their land. After the death of their leader, Chief Philip Metacomet, most of those remaining remained in the region until the 1800s. Starting north of the Lenape was a third Algonquin nation: the Mohawk, the Petununun, the Susquehannock, and the Schaghticoke. In 1800s, the Mohicans split into the Abenaki and Schagicoke, splitting into the Susques and the Mohawks. The Mohicans remained until the end of the 19th century when they were pushed out of the region by the French. In 1815, the state became part of the French colony of New Netherland, establishing the city of New Amsterdam. During the American Revolutionary War, a group of colonists attempted to take control of the British colony and eventually succeeded in establishing independence. The New York’s development of the interior, beginning with the Erie Canal, gave it incomparable advantages over other regions of the east coast.

You want to know more about New York (state)?

This page is based on the article New York (state) published in Wikipedia (as of Dec. 13, 2020) and was automatically summarized using artificial intelligence.