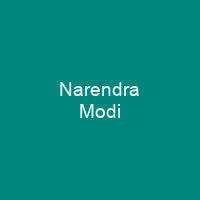 Narendra Damodardas Modi is the 14th and current Prime Minister of India. He was the Chief Minister of Gujarat from 2001 to 2014. Modi is a member of the Bharatiya Janata Party and the Rashtriya Swayamsevak Sangh. He is the first prime minister outside of the Indian National Congress to win two consecutive terms with a full majority.

About Narendra Modi in brief

Narendra Damodardas Modi is the 14th and current Prime Minister of India. He was the Chief Minister of Gujarat from 2001 to 2014. Modi is a member of the Bharatiya Janata Party and the Rashtriya Swayamsevak Sangh. He is the first prime minister outside of the Indian National Congress to win two consecutive terms with a full majority. Modi remains a figure of controversy domestically and internationally over his Hindu nationalist beliefs and his alleged role during the 2002 Gujarat riots. His administration has been criticised for failing to significantly improve health, poverty and education indices in the state. Modi led the BJP in the 2014 general election which gave the party a majority in the Indian lower house of parliament, the Lok Sabha, the first time for any single party since 1984. Following his party’s victory in the 2019 general election, his administration revoked the special status of Jammu and Kashmir. Modi’s administration also introduced the Citizenship Amendment Act, which resulted in widespread protests across the country. His policies as chief minister, credited with encouraging economic growth, have received praise. He has centralised power by abolishing the Planning Commission. He began a high-profile sanitation campaign, initiated a controversial demonetisation of high-denomination banknotes and weakened or abolished environmental and labour laws. Modi left home after finishing high-school in part due to child marriage to Jashodaben Chimanlal Modi, which he abandoned and publicly acknowledged only many decades later.

His family belonged to the Modh-Ghanchi-Teli community, which is categorised as an Other Backward Class by the Indian government. Modi was born on 17 September 1950 to a Gujarati Hindu family of grocers in Vadnagar, Mehsana district, Bombay State. Modi has an early gift for rhetoric in debates, with interest in theatre, which has influenced his political image. When he was eight years old, Modi discovered the RSS and became his political mentor. He also met Lakshammanrao Inamdar, who inducted him as a popular balsam balsar in the local shakhas. Modi began training with the RSS at the age of eight, beginning a long association with the organisation. In 1971 he became a full-time worker for the RSS, and was assigned to the BJP by the RSS in 1985. In 1985 he held several positions within the party hierarchy until 2001, rising to the rank of general secretary. In 2001 he was elected to the legislative assembly soon after and became a Member of Parliament for Varanasi. He left school in 1967 as an average student and a keen debater, withinterest in theatre. Modi preferred playing larger-than-life characters in theatrical productions, which had an early influence on his early political image, and this has influenced him. He later ran a tea stall with his brother near a bus terminus. He said he later ran his own stall and said that he later became a teacher at a local primary school. In 1975, Modi was forced to go into hiding.

You want to know more about Narendra Modi?

This page is based on the article Narendra Modi published in Wikipedia (as of Dec. 17, 2020) and was automatically summarized using artificial intelligence.