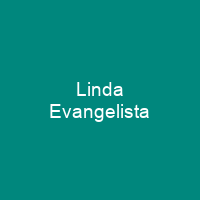 Linda Evangelista is a Canadian fashion model and one of the top supermodels from the 1990s. She retired from her career in 1998 and made a comeback three years later, this time working only sporadically. She has represented a diverse array of brands like Chanel, Valentino, Ralph Lauren, Yves Saint Laurent, Azzedine Alaïa, Giorgio Armani and Bill Blass.

About Linda Evangelista in brief

Linda Evangelista is a Canadian fashion model and one of the top supermodels from the 1990s. Evangelista’s modelling career began in 1984 when she signed with Elite Model Management after having moved from her native Canada to New York City. She holds the record for her multiple appearances on the cover of Vogue Italia, all of which were photographed by Steven Meisel. She retired from her career in 1998 and made a comeback three years later, this time working only sporadically. She has represented a diverse array of brands like Chanel, Valentino, Ralph Lauren, Yves Saint Laurent, Azzedine Alaïa, Giorgio Armani, Bill Blass, Herve Le Blass and Herve Chloé. In addition to her work for Versace and Lagerfeld, Evangelista has also modeled for various fashion brands, such as Valentino and Dolce &abbana. She was voted as \”The Greatest Supermodel of All Time\” by the viewers of the television show Fashion File in 2008. She is also known for the phrase \”We don’t wake up for less than USD 10,000 a day. \” She has been featured on over 700 magazine covers worldwide, including Vogue, Harper’s Bazaar, Cosmopolitan, Glamour, Mademoiselle, Elle, W, Marie Claire, Allure, Time, Interview, Newsweek, Rolling Stone, Cigar Aficionado, and i-D. She also became a muse to the late fashion designer Gianni Versace, for whom she first appeared in ad campaigns in 1987.

Her father, Tomaso, worked for General Motors, and died on January 17, 2014. Her mother, Marisa, was a bookkeeper. She grew up in a working-class, Roman Catholic household in the city of her birth, St. Catharines, Ontario, where she attended Denis Morris Catholic High School. As a teenager, she took part in the Miss Teen Niagara beauty pageant. At the age of 16, she flew to Japan to model there, but an unpleasant experience involving nudity during an assignment made her want to stop modelling altogether. She returned home to Canada, and two years went by before she decided to try her hand at modelling again. In 1985, she began working with Karl Lagerfield, the head designer of the fashion house Chanel,. to whom she would become a muse. She would go on to appear on the covers and in the pages of a variety of international publications such as Vogue,. Harper’s Bazaar and Cosmopolitan. In 1988, she had her hair cut short, nicknamed \”The Linda\”, which helped usher in the era of the supermodel. Described as the ‘chameleon’ of thefashion industry, and as a key figure among the five supermodels. On the subject of Evangelista, Lagersfeld once uttered, ‘There is not another model in the world as professional as she is.’

You want to know more about Linda Evangelista?

This page is based on the article Linda Evangelista published in Wikipedia (as of Nov. 24, 2020) and was automatically summarized using artificial intelligence.