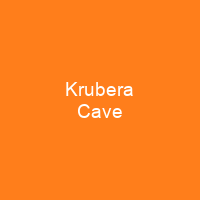 Krubera Cave is the second-deepest-known cave on Earth after the Veryovkina Cave. It is located in the Arabika Massif of the Gagra Range of the Western Caucasus, in Abkhazia, a breakaway region of Georgia. The difference in elevation of the cave’s entrance and its deepest explored point is 2,197 ± 20 metres.

About Krubera Cave in brief

Krubera Cave is the second-deepest-known cave on Earth after the Veryovkina Cave. It is located in the Arabika Massif of the Gagra Range of the Western Caucasus, in Abkhazia, a breakaway region of Georgia. The difference in elevation of the cave’s entrance and its deepest explored point is 2,197 ± 20 metres. In 2004, for the first time in the history of speleology, the Ukrainian Speleological Association expedition reached a depth greater than 2,000 metres and explored the cave to −2,080 m. Krubera is located at 2,256 m above sea level in the Ortobalagan Valley, a perfectly shaped, relatively shallow, glacial trough of the sub-Caucasian stretch. Since 1980, Ukrainian cavers have been undertaking systematic efforts in exploring the caves, resulting in exploration of the Kruber a to its current depth and of the Arabikskaja System to its depth of −1,110 m. The direct physical connection is a large hydrological system, connected to large springs at the shore of the Black Sea. All large caves of the Ortagan Valley likely belong to a single single hydrologic system, with a single physical connection with the Krubersa System with the Arabikaja System. Another deep cave in the valley, located in its very upper part, is Berchilskaya Cave, which is 500 m deep and explored by Ukrainian and Moldavian cavers.

The cave is one of the largest high-mountain limestone karst massifs in the Western Caucasus, with many deep caves, including the Snezhnaja-Mezhonogo-Iljuzia System, Pantjukhina Cave, and Berchil Cave. Among several hundred caves known in the Arabika Massif, fifteen have been explored deeper than 400 m and five deeper than 1,000 m, including Krubersa Cave and Berchil  Cave. The Arabika  Massif is bordered by the deeply incised canyons of Sandripsh, Kutushara, Gega and Bzyb rivers. To the southwest, Arabika borders the Black Sea and is composed of Lower Cretaceous and Upper Jurassic limestones that dip continuously southwest to the Black Sea and plunge below the modern sea level. The highest peak is the Peak of Speleologists (but the dominant summit is a typical pyramidal horn of theArabika Mount ). Some middle- to low-altitude ridges covered with forest lie between the central sector and the Black sea. The name Kruber C Cave was given after the noted Russian geographer Alexander Kruber. The original name was given to the cave by Soviet speleologists who explored the entrance pit in 1960. This name was used as a slang name by Kyiv speleologist during the 1980s due to a number of crows nesting in the entrance pit.

You want to know more about Krubera Cave?

This page is based on the article Krubera Cave published in Wikipedia (as of Nov. 24, 2020) and was automatically summarized using artificial intelligence.