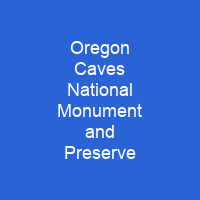 Oregon Caves National Monument and Preserve is a protected area in the northern Siskiyou Mountains of southwestern Oregon in the United States. The 4,554-acre park, including the marble cave, is 20 miles east of Cave Junction, on Oregon Route 46. Elijah Davidson, a resident of nearby Williams, discovered the cave in 1874.

About Oregon Caves National Monument and Preserve in brief

Oregon Caves National Monument and Preserve is a protected area in the northern Siskiyou Mountains of southwestern Oregon in the United States. The 4,554-acre park, including the marble cave, is 20 miles east of Cave Junction, on Oregon Route 46. Elijah Davidson, a resident of nearby Williams, discovered the cave in 1874. The main cave has known passages totaling about 15,000 feet in length. In December 2014, the U.S. Congress enlarged the protected area that includes the cave and changed its name from Oregon Caved National Monument to Oregon CavesNational Monument andPreserve. The preserve covers 4,070 acres, and both it and the monument, which abuts the preserve, are administered by the same staff. At least 8,500 years ago, the first contact with the first humans to inhabit the Rogue River region was with gatherers and gators. In late 2014, Congress added the River Styx to the National Wild and Scenic Rivers System, which is aimed at keeping the free-flowing stream in perpetuity. It is the only subterranean river in the Wild Rivers system. The river is named for the mythological Styx of Greek mythology connecting Earth to the Underworld. The cave is 55 miles southwest of Grants Pass, 300 miles south of Portland and 450 miles north of San Francisco. The caves are 20 miles east of the small city of cave Junction via Oregon Route46 off U. S. Route 199. One of the park trails leads through the forest to Big Tree, which at 13 feet is the widest Douglas fir known in Oregon.

At 13 feet, Big Tree is the biggest Douglas fir ever found in the state, and it is also the largest Douglas fir in the Pacific Northwest. The park trails also lead to the only known entrance into the main cave, known as the main entrance of Cave Creek. Within the cave, the stream from above enters the cave as the entrance of the Cave Creek River. Runoff from the heavily wooded monument forms small headwater streams of the Illinois River, a major tributary of theRogue River. Elevations within the monument range from 3,680 to 5,480 feet. Mount Elijah in the preserve rises to 6,390 feet. In December 2013, Congress expanded the protectedarea by about 4,000 acres and re-designated a National Monument and Preserves. The National Park Service assumed control of the monument in 1933. The NPS offers tours of the cave from mid-April through early November, and the cave is open to the public from May through November. The parent rock was originally limestone that metamorphosed to marble during the geologic processes that created the Klamath Mountains. Although the limestone formed about 190 million years old, the cave itself is no older than a few million years. The cavern also has scientific value; sections that are not on tour routes contain fossils of national importance. It has been named a National Historic Landmark and is part of the Oregon Cave Historic District within the park.

You want to know more about Oregon Caves National Monument and Preserve?

This page is based on the article Oregon Caves National Monument and Preserve published in Wikipedia (as of Nov. 02, 2020) and was automatically summarized using artificial intelligence.

Craters of the Moon National Monument and Preserve

Craters of the Moon National Monument and Preserve