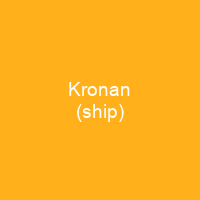 Kronan was a Swedish warship that served as the flagship of the Swedish Navy in the Baltic Sea in the 1670s. After four years of service, the ship foundered in rough weather at the Battle of Öland on 1 June 1676. The loss of Kronan was an important status symbol for the monarchy of the young Charles XI.

About Kronan (ship) in brief

Kronan was a Swedish warship that served as the flagship of the Swedish Navy in the Baltic Sea in the 1670s. After four years of service, the ship foundered in rough weather at the Battle of Öland on 1 June 1676. Kronan sank quickly, taking about 800 men and more than 100 guns with her, along with valuable military equipment, weapons, personal items, and large quantities of silver and gold coins. Its exact position was rediscovered in 1980 by the amateur researcher Anders Franzén, who had also located the 17th-century warship Vasa in the 1950s. Yearly diving operations have since surveyed and excavated the wreck site and salvaged artifacts. More than 30,000 artifacts have been recovered, and many have been conserved and put on permanent public display at the Kalmar County Museum in Kalmar. The loss of Kronan was an important status symbol for the monarchy of the young Charles XI. The move was bold royal ambition in an already highly militarized society geared for warfare, a fiscal-military state. Disbanding its armies would have required paying outstanding wages, so there was an underlying incentive to keep hostilities alive and let the army live off enemy lands and plunder. In the 1660s, Sweden was at its height as a European great power. The renewed attack on Denmark threatened the trade interests of the leading maritime nations of England and the Dutch Republic. The Dutch intervened in 1658 by sending a fleet to stop the attempt to crush Denmark.

England also sent a fleet in November the same year, to assist Sweden in keeping the Sound Toll out of Danish and Dutch control. The English expedition failed as a result of adverse winter weather and the political turmoil that ended the Protectorate, and in the end, Charles’ plans were thwarted. Charles X died in February 1660. Three months later, the Treaty of Copenhagen ended the war. By early 1672, Sweden had improved its relations with France enough to form an alliance. The Swedish army of 22,000 men advanced into Brandenburg under Carl Gustaf Wrangelenburg in December 1674 and suffered a minor tactical defeat at Battle of Fehrin in June 1675. Though not militarily significant, the defeat tarnished the Swedish reputation of near-invincibility that had enjoyed since the Thirty Years’ War. In 1674 Sweden was pressured into joining the war by attacking the German Republic’s northern allies and attacking the French Republic, which promised to pay Sweden to pay for the Swedish army’s subsidies. The war ended in 1674, and Sweden had come close to control over trade in theBaltic Sea, but the war revealed the need to prevent the formation of a powerful anti-Swedish alliance that included Denmark, England, and the Netherlands. The battle of Fehringin was fought in 1675 and Sweden was forced to withdraw from the war in 1676, but Sweden still had a strong military presence in the region. It was not until 1680s that the wreck fell into obscurity.

You want to know more about Kronan (ship)?

This page is based on the article Kronan (ship) published in Wikipedia (as of Nov. 19, 2020) and was automatically summarized using artificial intelligence.