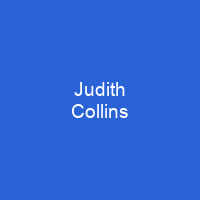 Judith Anne Collins is a New Zealand politician serving as Leader of the Opposition. She is the second female leader of the National Party, after Jenny Shipley. Collins led the party to its second-worst defeat in the party’s history at the 2020 election, losing 23 seats. She was elected to succeed Todd Muller as National Party Leader by the parliamentary caucus on 14 July 2020.

About Judith Collins in brief

Judith Anne Collins is a New Zealand politician serving as Leader of the Opposition. She is the second female leader of the National Party, after Jenny Shipley. Collins was a government minister in the cabinets of John Key and of Bill English. She served as Minister of Police and Minister of Corrections from 2008 to 2011 and 2015 to 2016. She resigned in 2014 following email leaks alleging she had undermined the head of the Serious Fraud Office whilst she was Police Minister. Collins led the party to its second-worst defeat in the party’s history at the 2020 election, losing 23 seats. She was elected to succeed Todd Muller as National Party Leader by the parliamentary caucus on 14 July 2020. She has served as the Member of Parliament for Papakura since 2008 and was MP for Clevedon from 2002 to 2008. Prior to entering politics, Collins worked as a commercial lawyer and was President of the Auckland District Law Society and Vice-President of the New Zealand Law Society. In 2004 Collins was awarded the Ex-Vietnam Services Association Pin for campaigning for an inquiry into Agent Orange exposure in New Zealand during the Vietnam War. She originally announced her intention to seek the National party nomination for the 2008 election before the election. She met her husband, Chinese-Samoan David Wong-Tung, at university and they have one son. Collins has been a member of Zonta International and of Rotary International. She worked as solicitor for four different firms between 1981 and 1990, and then became principal of her own firm, Judith Collins & Associates.

In the last two years before election to Parliament, she worked as special counsel for Minter Ellison Rudd Watts. She was active in legal associations, and was Chairman of the Casino Control Authority and was a director of Housing New Zealand Limited. In 2003, Collins became National’s Associate Spokesperson on Health and Spokesperson on Internal Affairs. She then served as spokesperson on Family, spokesperson on Pacific Island Affairs, and spokesperson on Tourism. In 2013, she was appointed Minister of Justice and Minister for ACC. In 2014, she resigned from the Cabinet after being accused of undermining the Serious fraud Office while she was police minister. She later cleared of wrongdoing related to that incident and returned to the Cabinet in 2015. In 2016, she served under Prime Minister Bill English as Minister  of Revenue and Minister of Energy and Resources from 2016 to 2017. She was elected to Parliament in the 2002 election as the National MP forClevedon. She had been a Labour Party supporter from childhood, but by 2002 had become a National Party member for three years. Her parents were dairy farmers Percy and Jessie Collins of Walton in the Waikato and she was the youngest of six children. She attended Walton Primary School and Matamata College. In 1977 and 1978 she studied at the University of Canterbury. She obtained first an LLB and then a LLM and later a Master of Taxation Studies. In 1979 she switched to the University and obtained an LLM. In 1983, she became a lawyer, specialising in employment, property, commercial, and tax law.

You want to know more about Judith Collins?

This page is based on the article Judith Collins published in Wikipedia (as of Nov. 29, 2020) and was automatically summarized using artificial intelligence.