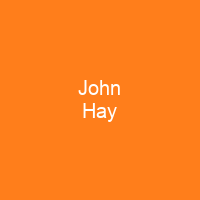 John Milton Hay was United States Secretary of State under Presidents William McKinley and Theodore Roosevelt. Hay negotiated the Hay–Pauncefote Treaty with the United Kingdom, the Hay-Bunau-Varilla Treaty with newly independent Republic of Panama. Hay also cleared the way for the building of the Panama Canal.

About John Hay in brief

John Milton Hay was an American statesman and official whose career in government stretched over almost half a century. Hay’s highest office was United States Secretary of State under Presidents William McKinley and Theodore Roosevelt. Hay was also an author and biographer, and wrote poetry and other literature throughout much of his life. Born in Indiana to an anti-slavery family that moved to Illinois when he was young, Hay showed great potential, and his family sent him to Brown University. Hay received his Master of Arts degree in 1858, and was, like his grandfather before him, Class Poet. Hay worked for Lincoln’s successful presidential campaign and became one of his private secretaries at the White House. Throughout the American Civil War, Hay was close to Lincoln and stood by his deathbed after the President was shot at Ford’s Theatre. Hay negotiated the Hay–Pauncefote Treaty with the United Kingdom, the Hay–Herrán Treaty with Colombia, and finally the Hay-Bunau-Varilla Treaty with newly independent Republic of Panama, Hay also cleared the way for the building of the Panama Canal. He was not a supporter of Lincoln until after his nomination in 1860, and then made then and then speeches for his nomination for president. Hay died in Springfield, Illinois, in 1913, at the age of 80. He is buried in Springfield. He had a son, John Milton Hay, who was a friend of Springfield attorney Abraham Lincoln and had read law in the firm Stuart and Lincoln.

Hay also had a daughter, Mary Milton Hay. She was a well-known author and poet. She died in New York in 1998. She is survived by her husband, Milton, and their son, David Hay, a former U.S. Navy officer who served in World War II. Hay is also survived by his daughter, Elizabeth Hay, and a son-in-law, John Hay, Jr., who served as a U.N. Ambassador to the United States in the 1950s and 1960s. He died in Illinois in 2013, at age 90. He leaves behind a wife, Mary, and two children, David and Elizabeth Hay. He also leaves a son and a grandson, Michael Hay, an attorney in Illinois. Hay wrote a biography of Lincoln that helped shape the assassinated president’s historical image. Hay and Lincoln were friends for many years, and he was a strong supporter of the Republican Party and the Republican presidential candidate in the 1860s and 1860s. In 1879 to 1881, Hay served as Assistant Secretary of state. Afterward, he remained in the private sector, until President McKinley, for whom he had been a major backer, made him Ambassador to United Kingdom in 1897. Hay helped negotiate the Open Door Policy, which kept China open to trade with all countries on an equal basis, with international powers. He later became a member of the New York City Board of Aldermen and served as Chairman of the Board of Trustees of the National Museum of American History.

You want to know more about John Hay?

This page is based on the article John Hay published in Wikipedia (as of Dec. 09, 2020) and was automatically summarized using artificial intelligence.