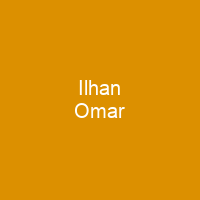 About Ilhan Omar in brief

Ilhan Abdullahi Omar is the U.S. Representative for Minnesota’s 5th congressional district since 2019. She is the first Somali American, the first naturalized citizen of African birth, and the first woman of color to represent Minnesota in the United States Congress. Omar is a member of the Congressional Progressive Caucus and has advocated for a living wage, affordable housing, universal healthcare, student loan debt forgiveness, and abolishing U. S. Immigration and Customs Enforcement. She has strongly opposed the immigration policies of the Trump administration, including the Trump travel ban. Omar has been the subject of several death threats, conspiracy theories, other harassment by political opponents, and false and misleading claims by Donald Trump. Her congressional district includes all of Minneapolis and some of its suburbs. She was born in Mogadishu, Somalia on October 4, 1982, and spent her early years in Baidoa, Somalia. Her father, Nur Omar Mohamed, an ethnic Somali from the Majeerteen clan of Northeastern Somalia, was a colonel in the Somali army under Siad Barre and also worked as a teacher trainer. Her mother, Fadhuma Abukar Haji Hussein, a Benadiri, died when Ilhan was two. She and her family fled Somalia to escape the war and spent four years in a Dadaab refugee camp in Garissa County, Kenya, near the Somali border. Omar was raised by her father and grandfather, who were moderate Sunni Muslims opposed to the rigid Wahhabi interpretation of Islam. Omar attended Thomas Edison High School, from which she graduated in 2001, and volunteered as a student organizer.

She graduated from North Dakota State University in 2011 with a bachelor’s degree, majoring in political science and international studies. Omar began her professional career as a community nutrition educator at the University of Minnesota, working in that capacity from 2006 to 2009 in the Greater Minneapolis–Saint Paul area. She served as campaign manager for Kari Dziedzic’s reelection campaign for the Minnesota State Senate. In 2013, Omar managed Andrew Johnson’s campaign for Minneapolis City Council. After Johnson was elected, she served as his Senior Policy Aide from 2013 to 2015. As of September 2015, Omar was Director of the Women Organizing Women Network, advocating for the women from East Africa to take on civic and political leadership roles. On August 9, Omar defeated incumbent Jeff Mohudor and incumbent Phyllis Mohamad in the primary election in the 60B District. Her chief opponent in the general election was Republican nominee Jeff Askimal Abdimal Askimal. In September 2018, Omar ran on the Democratic–Farmer–Labor ticket for the House of Representatives in 60B district. Her opponent was GOP nominee Jeff Abdimal Abdik Abdik Askimal, general nominee for the Republican Party of Minnesota. In 2016, Omar won the Democratic Party’s general election general election nomination for the Democratic-Farmer-Labor ticket on the party’s ticket. She became a U. s. citizen in 2000 when she was 17 years old. Her grandfather was the director of Somalia’s National Marine Transport.

You want to know more about Ilhan Omar?

This page is based on the article Ilhan Omar published in Wikipedia (as of Nov. 29, 2020) and was automatically summarized using artificial intelligence.