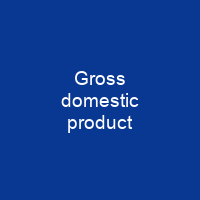 Gross domestic product is a monetary measure of the market value of all the final goods and services produced in a specific time period. William Petty came up with a basic concept of GDP to attack landlords against unfair taxation during warfare between the Dutch and the English between 1654 and 1676. After the Bretton Woods conference in 1944, GDP became the main tool for measuring a country’s economy.

About Gross domestic product in brief

Gross domestic product is a monetary measure of the market value of all the final goods and services produced in a specific time period. GDP is often used as a metric for international comparisons as well as a broad measure of economic progress. William Petty came up with a basic concept of GDP to attack landlords against unfair taxation during warfare between the Dutch and the English between 1654 and 1676. Simon Kuznets warned against its use as a measure of welfare in 1934. After the Bretton Woods conference in 1944, GDP became the main tool for measuring a country’s economy. The switch from GNP to GDP in the US was in 1991, trailing behind most other nations. GDP became truly global in 1993 when China officially adopted it as its indicator of economic performance. The value added by the public sector, by financial industries, and by intangible asset creation is more complex. These activities are increasingly important in developed economies, and the international conventions governing their estimation and their inclusion or exclusion in GDP regularly change in an attempt to keep up with industrial advances. The number for GDP is, therefore, the product of a vast patchwork of statistics and a complicated set of processes carried out on the raw data to fit them to the conceptual framework. The most direct of the three is the production approach, which sums the outputs of every class of enterprise to arrive at the total. The income approach works on the principle that the incomes of the productive factors must be equal to the value of their product, and determines GDP by finding the sum of all producers’ incomes.

Also known as the Value Added Approach, it calculates how much value is contributed at each stage of production. For measuring output at producer price, economic activities are classified into various sectors. Subtracting each indirect sector’s value from output from intermediate consumption gives the gross output at cost plus taxes less subsidies on products. The sum of the various economic activities is known as gross value added in economic activities. The ratio of GDP to the total population of the region is the per capita GDP and the same is called Mean Standard of Living. The total GDP can also be broken down into the contribution of each industry or sector of the economy. It is calculated by any of the following methods: The value of output of all sectors is then calculated by the following method: The output of each sector is then taken to get the total GDP at cost factor. This approach mirrors the OECD definition given above. GDP per capita does not, however, reflect differences in the cost of living and the inflation rates of the countries; therefore, using a basis of GDP per capita at purchasing power parity is arguably more useful when comparing living standards between nations, while nominal GDP is more useful comparing national economies on the international market. In the words of one academic economist, ‘GDP at producer cost factor’ is the number that is used to measure GDP at the producer price of a country’s output of a given time period, such as in the 1990s.

You want to know more about Gross domestic product?

This page is based on the article Gross domestic product published in Wikipedia (as of Dec. 05, 2020) and was automatically summarized using artificial intelligence.